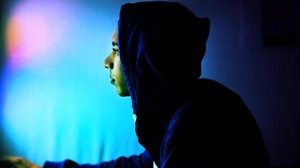 What would you do if you discovered someone else was reliving your life?

Ed Harris’ second Dangerous Visions play (his first was Billions in the 2013 season) works on a number of levels – it’s a discussion of abuse of trust between a carer and his subject, it deals with the way in which personal gratification can become paramount in a relationship, and it’s got a lot to say about the nature of addiction and love. It’s set in the proverbial day after tomorrow, when virtual reality games have taken the next step and can recreate the past in such a vivid way that you truly believe it.

There are many sharp observations about the dangers of total immersion in anything, whether it’s a game or a relationship (past or present), and Harris has a somewhat cynical view of human nature on display amid the black humour that permeates the piece. There are many sharp turns within the story (hence why I’m not giving too much away about the plot), and at least one moment within the game at its heart that is likely to send shivers up your spine as harsh reality intrudes.

Jonquil Panting gets great performances from her cast, particularly when some of the aforementioned sharp turns occur, and you might well be left wondering whether some of its predictions are closer to reality than we might like.

Verdict: Sharp and biting, this is another strong Dangerous Vision. 8/10

Click here for a clip from Your Perfect Summer…