A gang break into a house to steal a seemingly rare videotape, but discover more than they bargained for when they begin to watch some of the trove of old VHS tapes littering the property. 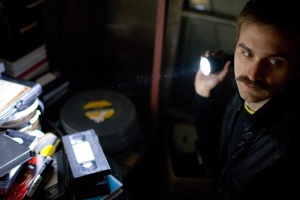 The anthology horror film is always a tricky beast, with Britain’s Amicus making something of a speciality of the form in the 1960s and 1970s. It has been little seen in recent years, and sad to say that despite a lot of promise in the premise, V/H/S fails to bring anything new to the form. That’s mainly because this truly atrocious movie has subscribed wholeheartedly to the beyond tired ‘found footage’ genre for its entire length.

Why the thieves have to steal the tape—the initial set-up of the story—is never revealed, as is the reason why they think it smart to videotape themselves in the act of breaking and entering. Despite discovering the seemingly long-dead body of a previous viewer of the tapes in the house, various members of the party settle in for a viewing session. The set-up is a great idea, but the execution is tiresome and lacking in any fresh ideas.

What follows are various stories written and directed by different teams, but each one to varying degrees subscribes to the camcorder genre to tiresome effect. One is structured as a Skype-type video call, which is fairly inventive (and seems to feature spooky demonic beings that the end credits tag as ‘aliens’), while the final video climaxes with a rush to escape a haunted house where all kinds of weird digital shit is unleashed.

Other than that, this is a tiresome accumulation of clichés, both in subject matter (dodgy pick-up for sex goes wrong, kids in woods meet video-effect slasher, honeymooning couple encounter serial killer) and in presentation, with the giddy, shonky hand-held camera work and raucous soundtrack proving to be headache inducing. The script is terrible, the characters barely developed, the actors amateur night talents and the whole far less than the sum of its parts. What a disappointment.

For such talented filmmakers as Ti West (The Roost, The House of the Devil, The Innkeepers) and Glenn McQuaid (I Sell the Dead) to waste their time on this rubbish just smacks of ‘Will this do’ laziness, or rampant self-indulgence.

Verdict: Hyped as the next big thing in horror, V/H/S proves to be a genuine waste of time and effort—unless you are still in love with ‘found footage’ terror, in which case add a couple of points to this score. 3/10