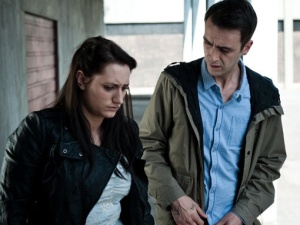 Kelly finds herself trapped in the body of a coma victim…

You’d expect, after last week’s high drama, that Misfits would be a bit more light-hearted as a contrast in this episode, but in fact it maintains a lot of the intensity, with a life or death choice, and a key supporting player written out.

The E4 continuity announcer flippantly commented that he thought that the gang had lost the ability to kill off their probation workers, but Shaun’s death isn’t played for laughs in the slightest. Stabbed by the possessed Kelly, he would probably have survived if an ambulance was called, but the gang can’t take the risk of their friend being arrested for the stabbing – after all, who would believe their story?

Nor is Rudy’s dilemma with his anger management social worker treated as a joke (well, not all the time – there’s a great scene where one of the Rudys doesn’t realise that he’s about to get a hand job), and he doesn’t come across half as annoyingly when written like this.

But once again the episode belongs to Lauren Socha, playing yet another version of Kelly, this time possessed by a well-meaning girl who has become understandably bitter and twisted as a result of being in a coma. Her realisation that she couldn’t live with herself if she lets Kelly die in her place, and her subsequent actions give Socha a chance to demonstrate yet more sides to her acting.