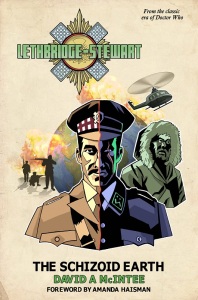 By David A. McIntee

At the end of Andy Frankham-Allen’s opening novel in the series, Alistair Lethbridge-Stewart was heading for Tibet – but he never gets there, instead finding himself somewhere very different in David McIntee’s new story, which shares some similarities (and characters) with his Doctor-less Pertwee-era story, The Face of the Enemy. McIntee showed in that book (and in his audio-only story for the Brigadier that appeared on the BBC’s Short Trips CD and cassette back in the late 1990s) that he understood that there was far more to Lethbridge-Stewart than the sometimes one-dimensional way in which he was written for the TV series.

The new novel flirts with some of the tropes of 60s spy-fi with questions of identity at its heart, and in some ways, the change of running order for the series hasn’t helped. Lance Parkin’s Horror of Det-Sen should have followed this, and given a space between the future UNIT stalwart dealing with issues regarding his family (at least I hope that was the case – or this is going to become a soap opera rather too quickly). Parkin stepping aside from the range meant that two stories in quick succession bring the Lethbridge-Stewart family into sharp relief.

It’s one of those stories that is confusing until the big reveal and will probably reward a second reading once you know who is doing what with whom – what seems to be a continuity error when Alistair is surprised by some information that he himself volunteered earlier can probably be explained by the multiple times he’s drugged during the story! McIntee’s action sequence writing is one of his trademarks, with his keen interest in different sorts of military hardware this time becoming important to the plot, rather than just the Tom Clancey-esque namedropping it could be, although overall there are times when the prose isn’t as polished as it should be and the reader may struggle to envisage what’s happening.

Although there was much talk that the series wasn’t going to try to answer the perennial UNIT dating problem, it seems as if definite decisions have been made, with Anne Travers correcting her father about the date of The Web of Fear, and 1959 being established as ten years prior… It’s probably a good move, as it allows the series plenty of scope to grow before we reach The Invasion.

Verdict: A high-concept thriller that just about comes off, even if you do sometimes feel as if the canvas is just a bit too broad. 7/10