Review: Doctor Who: Big Finish Audio 208: The Waters of Amsterdam 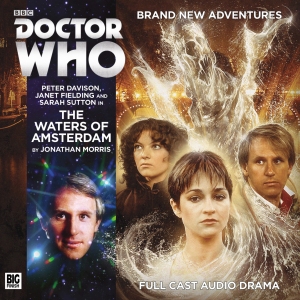 An old master, a clinging former boyfriend and a stranded alien all cause problems for the Fifth Doctor, Tegan and Nyssa…

The first episode of The Waters of Amsterdam is quite unlike anything that Big Finish has done before, and while it’s not something that I’d encourage as a regular practice, works incredibly well here, melding the new series’ emotional beats into the relationships from the classic era. Tegan’s experiences between Time-Flight and Arc of Infinity haven’t really been delved into before – we know what Nyssa and the Doctor got up to, thanks to multiple Big Finish audios over the past nearly-twenty years! – and director Jamie Anderson gives this opening episode, which spends quite a bit of time revealing the ups and downs of Tegan’s affair with Kyle, a very different energy to the rest of the story, befitting Jonny Morris’ thoughtful script.

Janet Fielding and Sarah Sutton clearly enjoy the other sides to their characters revealed in these scenes, and Sutton and Richard James as Rembrandt share a scene later that coincidentally taps into the same emotional area as this month’s Short Trip – and reminds us of the underlying sadness in Nyssa.

There’s much to enjoy in the other three episodes too – Rembrandt isn’t perhaps how you’d expect him to be, and the story bowls along fast enough that the homages to other Who tales don’t necessarily strike you until after it’s all over. Anderson has brought some less familiar voices to the studio – or at least less familiar for the Doctor Who range – which also gives the story a different feel, and once again Martin Montague’s sound design and Jamie Robertson’s music lend the production a cinematic scope. The challenges of the monster Morris has created must have been nightmare-inducing for a sound designer!

Verdict: Some strong work across the board makes this one of the best Fifth Doctor tales from Big Finish. 9/10