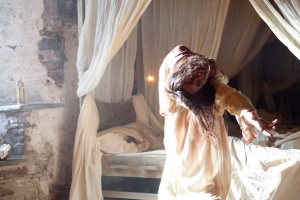 Jamie Payne steps into the director’s chair for this episode and maintains David S. Goyer’s flamboyant approach to the visual style of the series, although there are perhaps a few less sweeping panoramas of CGI Florence on show. That’s appropriate for an episode which is considerably more down and dirty than its predecessors, with Leonardo trying to work on the weaponry for Florence, but distracted by his quest, and by an outbreak of demonic possession at a local convent.

There’s an ongoing subplot of Riario playing a game with a prisoner which provides some commentary on the other events, but that sort of thing can sometimes become too clever for its own good – we’ve already got Leonardo’s dreams adding an extra layer (and the one this week is quite horrific!)

There’s the requisite – quite graphic – sex and violence, but much of it is used to forward the plots rather than fill the episode running time (although I suspect all the key points of this week’s tale could have been made within a standard 42 minute length). There’s a nice I Claudius vibe to some of the plotting, which leads to a few real surprises.

Verdict: Gruesome at times, it still feels as if Da Vinci’s Demons is trying to find the right balance between standalone elements and forwarding its arc. 7/10