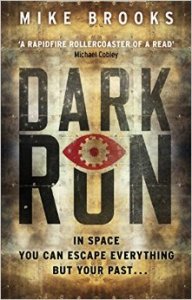 British author Mike Brooks’ debut novel, Dark Run, is published on 4th June by Del Rey UK, and throws the reader into an intriguing and well-imagined universe a few decades into our future. It’s promoted as the first book in a series, so we asked him to talk about how he chose what to explain about the background of his tales in this opening volume…

You’re writing the first book in a planned series and you’re full of ideas. You’re writing ‘genre fiction’, so you’ve created at least some part of a world. It might be a full-blown fantasy world, with magic and strange creatures galore. It might be a science-fiction world, with advanced tech and maybe spaceships and possibly aliens. Or it could be a more urban fantasy, where you’ve taken elements of the world we know today and changed them to suit your own purposes. Whichever it is, you’re not writing literature and that means you have to use some imagination.

But how much of your craftspersonship should you reveal to the reader in this first volume?

To a certain extent, the answer to that question is dependent on another, secondary question: ‘How much have you got?’ You can’t show what you don’t have, however much Wonderbra would like to suggest otherwise. Sure, you can drop hints and let the reader fill in some of the rest themselves, but sooner or later you’re going to need to make good on those hints, and readers will remember. If you’re dropping hints without knowing what it is you’re hinting at, you’re likely to trip up over yourself and then have to engage in some hasty retconning. At the other end of the scale, you could give glimpses of a wider world only to not be able to follow up satisfactorily on the majesty you’ve promised, and that won’t go down well either. Don’t believe me? Go ask the internet what it thought of the second and third Matrix films. 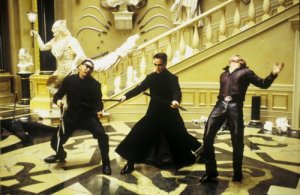 But let’s say your world is meticulously crafted, down to whatever level of detail you need to make it work in your own head. How much of that should you show in the first book?

Obviously, you should get the main points out there. The plot and the characters need to grip the reader, but the world the story is set in is the tapestry that makes it matter. There’s little point in your characters overthrowing a dark warlord or a galactic empire unless the reader knows why these things need to be overthrown in the first place. You need to provide a context for your characters’ actions, first and foremost. In my debut novel Dark Run, my protagonists’ motivation is trying to stay alive. That’s easy to understand, and the fact that they’re trying to stay alive while flying around the galaxy is secondary.

Next, you’ve got the broad detail, the things that quickly make it obvious how your world differs to other, potentially similar stories. In Luke Scull’s fantasy The Grim Company his world used to have actual gods, but powerful sorcerers killed them all: once you read that you know you’re not, for example, in the fantasy worlds of Scott Lynch or George RR Martin. In Dark Run humanity has an Alcubierre Drive that bends space-time to make faster-than-light travel possible, but we haven’t worked out a way to send messages faster than light, so over a distance greater than a solar system no message can travel faster than the person carrying it. That means that every solar system is as isolated as any town or village was in the Wild West, awaiting news from the interplanetary equivalent of the pony express, and that means you don’t get any of the instantaneous galaxy-spanning communication of, for example, Star Wars. In Kameron Hurley’s sci-fi God’s War, technology is largely based around bugs that are controlled by pheromones, and once you read that you know that you’re not in the same world as any other damn story I’ve ever read.

Lastly there is the fine detail, of the world, characters and plot. This is where the real balancing comes in, because you need to find a way to make your work unique and memorable without overloading the reader with irrelevant minutiae. And that’s the key word: irrelevant. Take, for example, Storm Front, the first novel in Jim Butcher’s wonderful Dresden Files. In that book you find out that there is a White Council of wizards, and they view the protagonist Harry Dresden with distrust. So much, in fact, that there’s a suspended death sentence over him. That’s all you need to know for that book, because that book is about Harry solving a supernatural murder case in his job as a wizard PI. It’s not until later in the series, when Harry’s world ceases to be about solving crimes as a job and he starts to get more involved in the larger problems affecting the wizarding world in general, that you get more details about the structure, nature and politics of the White Council. That level of detail would have been irrelevant in Storm Front, because all the story needed was the bare bones that Butcher would build on later. 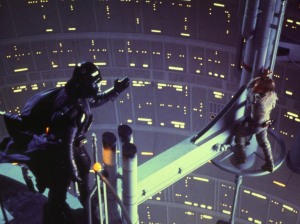 What applies to the world applies to plot and characters, too. If you watch the Star Wars movies in the order of release, all Darth Vader needs to be in A New Hope is the big, scary sorcerer bad guy. Dramatic irony is all well and good, but the revelation that he’s Luke Skywalker’s father in The Empire Strikes Back has much more punch if the audience doesn’t know it’s coming. The further revelation, that Luke and Leia are twins, is saved for Return Of The Jedi. If you watched the movies in chronological order with Episodes I, II and III first you’d know all those facts before you even got to Vader choking fools on Leia’s transport ship, and the impact of some of the seminal moments of the original trilogy would have been lost. Whatever other mistakes Lucas made with Star Wars, his decision to make IV, V and VI before I, II and III was a good one, as was keeping Obi-Wan close-mouthed about Luke’s family history. Vader’s final redemption would be much less surprising (and he himself much less scary) if the audience had already seen him being a lovesick teenager.

As far as my work goes, there’s plenty of background to the Dark Run world that isn’t in the first novel. As an example, I mention a few of the governmental conglomerates that have divided up the galaxy – the United States of North America, the Europan Commonwealth and the Federation of African States – but the others don’t have a real impact on the story. The fact that there’s also the South Asian Treaty, the Iberian-American Union, the West Pacific Nations, the Red Star Confederate and the United Arab Nations isn’t really relevant to Dark Run. On the other hand, Dark Sky is set solely on Red Star-controlled worlds, at which point more detail about it becomes appropriate.

I think the key with the first book in terms of plot points is to ensure that it’s self-contained, but with plenty of scope for sequels. There might be details of plot or character background that you’re dying to fit into it, but if it’s not going to be addressed or resolved in at least some way in the first book, you’re probably best leaving it out. I’ve left one big ‘dangling thread’ in Dark Run (and I’m curious to see how many people pick up on it), but the fact that it’s unresolved doesn’t prevent me from ending the book in a way that (hopefully) feels like closure to the reader. However, assuming the series continues, it’s there for me to pick up on and expand.

As to what that thread is? Well, that would be telling…