Agents of SHIELD: Review: Season 3: Episode 6: Among Us Hide 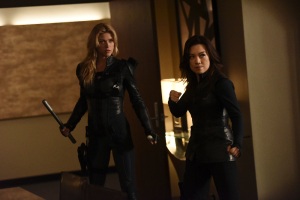 After the quiet breath of last week’s episode, the season kicks into high gear again. May and Bobbi are back in the field and kicking backside, Hunter is trying to make himself useful however he can, Coulson continues to get cosy with Rosalind, and Daisy and Mack are busy tracking exactly what it is that ACTU are up to.

So we are back to business in more ways than one, as after the brief hiatus of last episode’s touching two-hander with Fitz and Simmons, the show goes barrelling off again at a hundred miles an hour, with plot threads branching out all over the place, albeit this time with much more intersection than we started with.

So, Andrew’s alive, no thanks to Hunter’s itchy trigger finger. May faces off with him and Coulson relieves him of his Ward-hunting duties, leaving him listless and May to recruit Bobbi to accompany her on the new Bus in her new hunt for Ward. First stop – tracking down Von Strucker Junior now on the run from everyone.

I’ve mentioned previously that there was a suggestion to Palicki’s performance that Morse wasn’t all that aggrieved to be out of the field, and this is developed here, Bobbi attempting to talk her way out of the first tight spot that she and May find themselves in, and May confronting her with it later and delivering some home truths.

Von Strucker junior runs to an old friend of his Father’s for help, and that works out as well as you might expect – this is HYDRA after all.

Tracking down Thrash has become an urgent priority, and Daisy has convinced herself that he must be an ACTU member. Having established their number one suspect, she and Mack go off to tail him, driven by an increasingly desperate-to-be-useful Hunter. The interaction between the three of them is very refreshing, showing us a side to Hunter we don’t often get. Yes, he’s a blunt instrument, but there’s a surprisingly sophisticated brain at work in there too.

In parallel to this little mission, Coulson is headed to ACTU central with Rosalind. A brief interlude gives us some of that nice tit-for-tat interaction between the two that the show felt to be so obviously missing before, and the resolution cleverly leaves us still wondering quite who is winning this particular battle of frenemies.

Paths intersect when Daisy and Mack go to the next place on their suspect’s agenda. Daisy is appalled at what they find, and even more so as she pans out to see Coulson and Rosalind stood there blithely observing and apparently having a cosy conversation. They pull out and leave before they can give themselves away, and then we cut to that conversation, where in the third or fourth twist of the episode, Rosalind reveals an apparently sensitive side, with a story of her late husband’s loss to cancer, and the seemingly earnest aim of finding a ‘cure’ for the Inhumans to help them live normal lives. Could she really be this nice, or is the show just setting us up again? Whatever the truth, it certainly seems like Coulson is buying it for now.

And so back to Bobbi and May, who have tracked down where Von Strucker junior is holed up and burst in on him being tortured by Ward’s head thug and a couple of goons. The ensuing fight shows both are genuinely back at the top of their game, with Bobbi’s resolution particularly satisfying, but what they end up getting isn’t at all what May bargained for, as the dying Von Strucker gives us the last big gotcha moment of the episode. Dying in May’s arms, he babbles about what happened in the store, and we cut to a flashback scene as he describes events, seeing Andrew begin to change into a very familiar, very big and very angry Inhuman shape. May reacts with disbelief, but when the dying boy asks her ‘What is he?’ she can only reply, a lost look on her face ‘I don’t know.’

The end tag rams the point home in a predictable but effective way. The enemy is very much within – how long will it be before he’s revealed?

Verdict: I still can’t quite decide whether the disappointing episodes to begin with were just slow burners building the foundations or just genuinely bad, but this is much, much better. The show is finding its form again, and the way that it takes real time to dig into the characters is a welcome change of pace from so many superhero shows. Solid stuff. 8/10