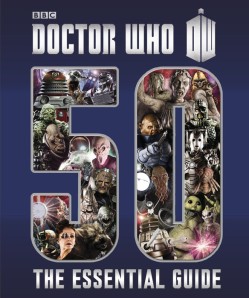 Since the return of the show, Justin Richards has been penning non-fiction books about various elements of Doctor Who – as well as keeping a guiding eye on a lot of the tie-in fiction – and also wrote the Legend history of the series which marked the 40th anniversary. It makes him the obvious person to pen this one-stop history of the series.

The earlier books have been compared (by me among many others) with the Doctor Who Monster Books which Terrance Dicks penned in the 1970s, on which Richards and the rest of our generation grew up. This is the update of that idea, telling the history of the programme, although of course there are a few things that have been revealed recently which put a different slant on some of the comments within the book – such as the “missing” Web of Fear, and the lack of regeneration for the 8th Doctor!

As Richards notes in the introduction, it confines itself primarily to the televised episodes, although there are a few cross-references to the other media (oddly, Bernard Cribbins’ appearance in the Dalek movies doesn’t get one). The majority of the entries are in chronological order, although there’s the odd one or two that sneak in early or late, perhaps because of the exigencies of design. We also get full page versions of the artwork for each incarnation which appear on the calendar and in various other places – sadly uncredited.

Verdict: Hitting all the key points, this is the book to get for the new-Who fan who wants to learn about the last 50 years without getting bogged down in the details that The Vault and The Doctor: His Lives and Times provide. 10/10

Click here to order Doctor Who: The Essential Guide