People are seeing tentacled monsters in Philadelphia: Pete and Myka investigate. While Artie comes to terms with his recent actions, Claudia uses an artefact to revive Steve Jinks. 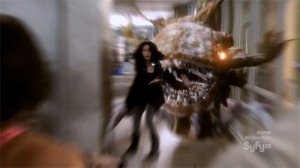 Warehouse 13 seems to have become a little heavy handed… The constant repetition in voice over and flashback of the warning about a great evil being unleashed by Artie’s actions in rewinding time becomes unintentionally hilarious through repetition: yeah, we get it already…

Similarly, the parallels between Claudia’s use of the metronome to bring back Jinks and Artie’s actions last episode are hammered home, making the whole thing seem rather portentous.

Thankfully, the Cthulu-inspired Pete and Myka story is light fun, with the monster hallucinations deliberately cheesy and Joanne Kelly having some fun with Myka’s aversion to all things tentacled.

Warehouse 13 often works best when it features stand-alone stories of artefacts, but this season looks like it is about to get enmeshed in a arc story that may not pay off come the conclusion…

Verdict: There is a great evil in repeated exposition and endless foreshadowing!