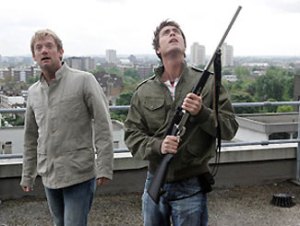 A deadly avian predator comes through the anomaly…

There have been some great homages to Alfred Hitchcock’s classic thriller The Birds over the years, and Primeval’s fifth episode is up there with the best of them. Mixing high comedy with tension, director Jamie Payne shows that he can handle an action-based script just as surely as last week’s character-driven piece.

It’s not all action, though. The connection between Cutter and Claudia Brown is played up at last, capitalising on the tension that has been there on screen since their first scene together. But by and large, this episode is pulp fun. And that’s a compliment.

The only real let-down is the plot strand in which Connor drives some considerable distance, without realising that he has a fellow passenger. In a Mini! Primeval often depends on ‘moronic logic’ to allow for things that could never happen in real life, but this really oversteps the mark. Surely there could have been a better way?

Verdict: With the trailer for episode six promising some answers at long last, it certainly feels as though Primeval‘s producers are still just scratching the surface of the concept. 8/10