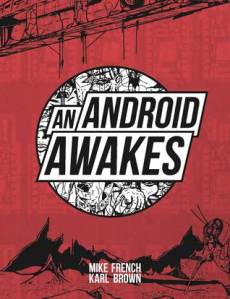 By Mike French and Karl Brown

Android Writer PD121928 has just 14 submissions left to make or he will be deactivated. Will he gain a publishing contract?

Mike French and Karl Brown’s book is an eclectic mix of illustrated short stories with linking text. Or is it a graphic novel with more text than is common? It’s certainly different from anything else out there, drawing you into the mind of the Android Writer as he becomes increasingly desperate to make a sale to avoid death, but also engaging you with the “novels” (which can’t be more than 1,000 words) that he’s submitting, and the very unusual mix of characters therein.

There’s a dark humour threaded through the book (references to the key number 42 don’t neglect the Adams-ian connection, for example), and some very intriguing concepts – not all of which are illustrated, and where they are, they can sometimes be rather different from what you’re expecting. It’s adult in tone, with some political commentary not hidden that far beneath the surface – Orwell’s 1984 is very much there in spirit, seen through the filter of a Blade Runner-esque future where the interconnection of man and machine can be at the most fundamental level.

Chances are you’ll go straight back and reread this as soon as you reach the end, spotting more connections both between the stories themselves and between them and the “real” world of PD121928 – and then hope for more from the creators.

Verdict: An unsettling look into a skewed world. 7/10