Brian Aldiss has enjoyed a most illustrious career in the science fiction genre which has spanned nearly sixty years. He has written over a hundred books and  his career has brought him into contact with some of the greatest names in the arts including Tolkien, Lewis and Kubrick. He collaborated with Steven Spielberg  on the adaption of his ‘Super Toys Last All Summer’ into the film AI Artificial Intelligence. His most recent novel, Finches of Mars, is published this week, and fifty of his previous books are being reprinted by HarperCollins as part of The Friday Project. To mark the launch, Aldiss looked back over his career – and provided a new short story, Munch, which can be read here.

Going right back to when you first began writing, what was the first story that you absolutely had to get down on paper?

I had thought of a funny idea while reading an SF mag called Authentic. I wrote it out and called it “POGSMITH”, and sent it to Authentic. Lo and behold, the editor published it.

His name was Bert Campbell (no relation to John W. Campbell). I got to know him quite well. We became friends.

Although laced with great humour, Finches of Mars appears to serve as a stark warning to humanity about the way we’re conducting ourselves on this planet. How much do your own thoughts tally with those of Mangalian as set down in the appendix?

Well, does anyone think that we conduct our affairs well in this world? On the whole, I mean. The 20th Century was Hell, with two world wars and with a raging form of Nazism in Germany and Communist oppression in Russia. I spent many years of my life behaving badly (mainly in the British Army). Who am I to talk, I who have sat here writing seventy or eighty books? We’ve killed off so many animals. Now we’re killing off the bees. Surely anyone with half a mind could see….

Heavens, you’re an SF reader, you know what a mess we’re making of the planet. Even my study is a bit untidy…

There are signs here and there that a mission to Mars might take place soon. Do you think it’s inevitable (supernovas in five billion years notwithstanding) that humanity’s future lies in the stars? And if so, how soon should we think about leaving home?

We should probably start running now! Look, I’ve just published my Finches of Mars, but I have no belief we will actually get to Mars. SF is full of assumptions, all perfectly reasonable at the time. When Mr Godwin write his very successful book, The Man in the Moone, in 16-something, he believed that Earth and Moon shared their atmosphere.

Why not? Perfectly reasonable, utterly wrong.

Back in Gernsback’s days, another assumption, that there would be predicted cities on the moon. The fact is that it was all but impossible to get to the Moon, and terribly expensive to do. And what can you do when and if you’re on the Moon? Bugger all… Just stand about and be photographed. Here we suffer from a Victorian assumption. We speak and think of space. Space is what you may find in a cupboard. In actual fact what’s out there teems with raging destructive particles. Read Finches of Mars if you don’t believe me. 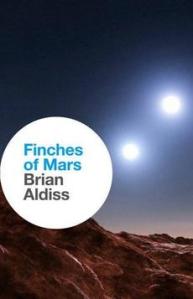 Your career spans sixty years in publishing. Ebooks are becoming more and more common: are digitised books something you are comfortable with, or do you have any reservations about the possibility of the physical objects disappearing into hard drives?

Thank heavens, I was born after the days of the quill pen! Well, just…

I love hard covers. My shelves are lined with them. And I miss the old independent paperbacks. But so what? I like what goes on today, with its great variety. What about Google? Couldn’t live without it. Google makes me appear intelligent. Folk like something to clutch. (What am I saying!!?} I’d guess your hard drive needs physical company. Till next Christmas at least.

What would you say sets the science fiction genre apart from all other forms of writing?

Good question. It’s better in the States, folks. They are not so snobby. They never had a Dr Johnson or a Shakespeare. I’ve been reading the TLS [Times Literary Supplement] for half a century; it is rare to get reviewed there. So elitism is a problem. Isn’t another problem that so much SF is mere sensationalism? (Do I watch Doctor Who? Christ, no!) Philip K. Dick felt as I do. He wanted to address everyone.

He and I hope to address the world. (Well, some of my books are published in China…) But the best Phil Dick movie is The Truman Show – brilliant! – made after Dick had died. And when I’ve said all this, I must reply more directly to your question. We write SF because it’s different and expresses something different…

How can I answer for something in The Brightfount Diaries, my first book? Of course I can make up an answer. Books generally come from both heart and head. I have often used personal misery, making it take human form. There was a time my marriage broke up and I lost my children. Life was all deserts. I sat in one room in an Oxford slum and wrote Greybeard. There England crumbles into formless forest. Because… Because not a child survives.

When writing, I thought. “This is so miserable. Nobody’s going to want to read this.” Now, a lot later, I have my children (adult now, of course) back and Greybeard is a Penguin Modern Classic. This is not a boast (well, a bit, I suppose) but it shows that many people suffer from broken marriages and loss of beloved kiddies, So one hopes that Greybeard has proved a comfort to them – and to Penguin,

Following the publication of Finches of Mars, will you continue writing and if so, what?

Yes, thanks, one does continue writing because one can’t help it. I keep a voluminous Journal. Now on Volume 76. That makes two yards of shelf space. It will go to the Bodleian Library when I die. Not a penny do I get for it. Oh. And I’ve started another novel, this one is marvellous….

Thanks to Sabah Khan for assistance in arranging this interview

Click here to order Finches of Mars from Amazon.co.uk