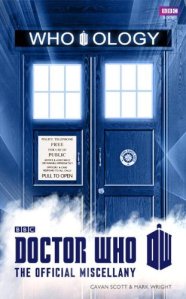 Cavan Scott and Mark Wright’s names will be familiar to readers of Sci-Fi Bulletin for their contributions to the Doctor Who, Sarah Jane Adventures and Blake’s 7 tie-in ranges. Scott has also written adventures for Warhammer 40,000, Skylanders, and Judge Dredd while Wright’s work includes Power Rangers stories. Both regularly write for Doctor Who Magazine and recently penned Who-ology, described as “the official miscellany” for Doctor Who. They chatted about the book with Paul Simpson…

How did you come to write Who-ology?

Cavan Scott: We were asked, which was rather lovely. I’ve worked with BBC Books in a solo-capacity before, having written a number of Countryfile books plus the companion to Planet Dinosaur. I’d been campaigning to get my grubby little hands on a Who book for years, and then the phone rang…

Mark Wright: …and then my phone rang, and it was Cav, telling me that Albert DePetrillo at BBC Books had been in touch about the pair of us putting together a Doctor Who miscellany. As a freelancer, it’s the kind of phone call you don’t forget.

What parameters were you given?

CS: Albert said he wanted detail, but we had to make sure it would also be accessible to new fans and casual viewers alike. We could also mention some of content from the many Who novels and audios there have been over the years but not to go too mad. This was mainly to be about the TV show.

Which were the hardest parts to research (if anything’s hard when it involves watching the show)?

MW: So much of Doctor Who is documented in fine detail these days that there was a lot of information ready to hand from various sources – Andrew Pixley’s archive features from Doctor Who Magazine are an invaluable resource in pinning down certain dates. But there are some lists which need a bit more of a creative approach, and the section on pop culture and Doctor Who was often a collision of diverse sources. Overall, I’d say the Dalek extermination count was probably the trickiest as it involved watching all the Dalek episodes in more detail than most of our other viewing activities for the book. Sometimes sitting there with eyes closed, counting how many exterminates you hear when there are multiple Daleks on screen. Great fun, but tricky.

Did the fact that some classic stories only exist as audios cause a problem with research?

MW: Not particularly. I think I enjoyed that aspect of it quite a bit. It took me back to the days when viewing Doctor Who had a more active element to it, when we had to track down grainy eighth gen copies of a Pertwee story, or excited that somebody you knew had a lead on a mate down the pub who might just have Earthshock on video. The experience of writing Who-ology has given me that back, in this age of having everything on DVD and to hand very easily. There was an added dimension to watching the show again.

Did you come away with a heightened appreciation of any aspect of the show (classic or nu) as a result of working on the book?

CS: I think the thing I came away with is that there is no such thing as classic or nu, just Doctor Who. It’s one, big wonderfully jumbled story. Yes there are continuity clashes, yes there are distinct styles at time, but it all feels remarkably consistent. For example, the transition between the Sylvester McCoy era through to Rose and beyond is amazingly linear. The Doctor / companion relationship, while not romantic is closer than ever before, incredibly tactile compared to what we’ve seen before. And his last speech in Survival? It could have been written by RTD or Moffat. Very 21st Century Who.

How much did you work with Ben Morris on the illustrations?

CS: Very closely. It was one of the joys to the book to be honest. Ben became a very important third part of the team, and was working on the illos as we were writing. Plus, I’m a real infographic geek so it was fantastic concocting the various graphs with him. In fact, there’s a couple that didn’t make it due to space issues. Hopefully they’ll appear somewhere in future.

MW: Ben really deserves as much credit as Cav and I for his work on Who-ology. His illustrations are amazing and really help establish the tone of the book in concert with the writing. The collaboration with Ben has been one of the best things about the whole process and he never balked at any of our ideas – and in return added his own creative flair to the whole project

What was the most unusual fact you discovered while working on this?

MW: There’s a couple that relate to Jon Pertwee that I think are great – firstly that he released an album in 1962 entitled Jon Pertwee Sings Song for Vulgar Boatmen. Secondly, I love the circumstances surrounding how he was surprised by Eamonn Andrews for This is Your Life, with the presenter pitching up outside TV Centre in an IMC buggy from Colony in Space, holding the famous red book. These moments are pinned down through the history of the show, and I love that.

CS: I’m quite tickled by the fact that the Daleks have offered people drinks more times than they’ve announced that they are the superior beings. And then there are those things that make you go ‘really?’ such as the fact that the Tenth Doctor has more stories set in the future than any other incarnation. But what of all those stories set on present day Earth? Well, when you look into it, they all take place twelve months into the future. Would anyone care about such technicalities other than a Doctor Who fan? Nope. But they’re fun all the same.

What lists did you have to lose in the edit?

CS: There were a few, and we had loads more brainstorm. Enough (ahem) maybe to fill a second volume, if BBC Books are reading this…

Did you learn anything specific that will feature in your next Who fiction?

MW: Nothing that springs specifically to mind. I think through writing Who-ology, we’ve gained a new insight into the overall shape of Doctor Who, on and offscreen, and possibly regained an appreciation of just how wonderful and brilliant and varied the show is. Something that I knew back in the day when I was a thirteen year old fan immersed in every element of Doctor Who, but that perhaps leaves us or lessens as we get older and families and responsibilities come along. I hope we’ve written the kind of book that my thirteen year old self would have loved to get hold of.

CS: I think writing Who-ology reminded us of a few details from the Ninth Doctor era that we were then able to slip in when writing The Night of the Whisper, our segment of AudioGo’s 50th Anniversary Destiny of the Doctor series. There’s a few references that I’d forgotten before wading through the Eccleston episodes for Who-ology – nothing major, just little references that will be a nod and a wink to fans without getting in the way of the story.

Read our review of Who-ology here