Interview: Jeff Wayne (The War of the Worlds) 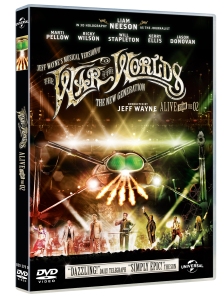 One of the longest-lasting concept albums in history has been Jeff Wayne’s Musical Version of The War of the Worlds, which arrived in 1978 and proceeded to dominate the charts. Over the past few years Wayne – whose other compositions include the score for the Alastair MacLean movie Golden Rendezvous, and a further concept album Spartacus (featuring Anthony Hopkins and Catherine Zeta-Jones) – has conducted a live version of The War of the Worlds in arenas around the world. In 2012, a new version of the album, dubbed The Next Generation, arrived, accompanied by a new tour (whose DVD and Blu-ray is released this week). Liam Neeson replaces Richard Burton as the Journalist in the expanded edition, which, as Wayne discusses below, is a companion, not a replacement for the original. Paul Simpson chatted with Wayne about the pieces (as well as the lack of availability of the Golden Rendezvous score and how good The War of the Worlds sounds on a church organ!)… 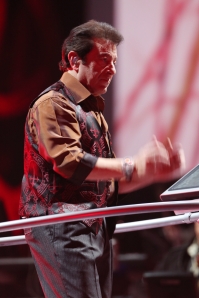 Did you rework your original score of The War of the Worlds from scratch for The New Generation, or did you simply go back and add extra bars (measures) to fit the new dialogue?

The trigger for the New Generation recording was the story itself. Over the years I’d been asked, particularly by Sony, the record company, if I would consider doing a new version, without knowing exactly what they meant by that (presumably new guest artists), but for me it wasn’t about taking the original recording and replacing the original artists with new artists. I wanted to feel motivated that there was something to say that was different in the modern world to the way that I did it in the mid-Seventies.

After I finished the tour at Christmas 2010, I had a small family holiday and I took with me the original script that I recorded with all the artists, not just the part that Richard Burton played, although he was the one true acting role, the glue to the whole story. When I read it, it reminded me that there was a lot of material that didn’t make it to the original double album, and therefore all the tours up until what became this last one at the end of 2012.

Some of it was the format of the day: the black vinyl disc. There was a finite amount of time you could get on each side. Another key reason was the way that I saw t at that date. There was a lot of rich material in the story that I felt justified exploring doing a new recording.

To give you an idea: what wound up on the original album with Richard Burton was 74 sequences, whereas Liam Neeson, both on the new album and on our tour, performs 90 sequences. Because of the way the story has now grown a bit, it forced me to review my score; the composition has been extended to work with the timings that now exist, but I’ve also got a lot of new content on there. The total additional running time (from memory) is about another twelve minutes on the album, and there’s a few extra minutes in addition to that in the live tour – material that works within a show, but not within the confines of a recording.

Overall there’s upwards of fifteen minutes of new material. My orchestrations, my productions were all essentially new – the one sound that I did keep was the symphonic string orchestra, although there are new string arrangements in there, funnily enough, particularly in the show. Everything else was freshly recorded or re-recorded because that was the whole purpose of it to me; it wasn’t a remix. Of course the final layer was the guest artists, and I was very fortunate to attract those that I did. 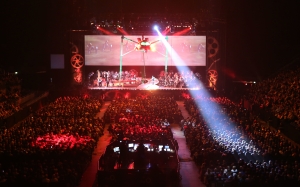 I think there’s a lot of that if you listen to it carefully; that was the whole idea. I didn’t want to lose what I first composed and produced, but I wanted it to be standing in its own space. The new recording and the new tours are a companion not a replacement.

From the way that it’s been received, I think it’s achieved largely that.

I was at the Brighton performance last year, and the audience were reacting to the story in a different way to the way they had in 2010.

I hope it was favourable!

I understand what people are saying after seeing the movie of Les Miserables:  that expands on the story and has new ingredients, which have made the understanding of the original Victor Hugo novel that much more complete compared with the stage version, which I’ve seen many times and loved. It’s a wonderful score and story, but the film opened it up. Looking back now, without realising it at the time, that’s what I was attempting to do with the new album and the new production. 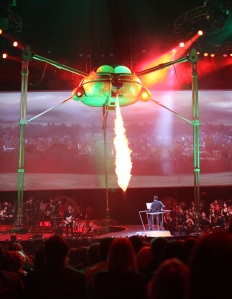 Wells’ story is very much an analogy for British imperialism; did you try to bring out more of that in The New Generation, or do you think by allowing more of the story to be there, you allowed it to come through?

H.G. Wells wrote this very dark Victorian tale, and the core of what you just said is one of the things that attracted me. H.G.’s Martians with tentacles was his analogy for the expansion of the British Empire. Right from the beginning I was feeling that and wanted to stay true to H.G. Wells. I believed in that as well; The New Generation has touched on that, and our next tour, and anything we do beyond that, will highlight that even more.

Have you ever been tempted to give any of Wells’ other stories the same sort of musical treatment?

I’ve read a number of his works. From my point of view as a composer, as a creative person, I tend to look for a story that just reaches me, that ticks all the boxes, and particularly as a musical interpretation.

You have separate issues that also involve copyright so it’s not as straightforward as it might sound – “Oh I’m going to do a musical interpretation or a live production based on whatever story you want”. The War of the Worlds remains in copyright as a book; not many more years left, funnily enough. All of H.G. Wells’ books remain under that category although you’ll find that a good chunk of them have been sold off for movies.

It just happened – for whatever reason, and my dad and I never found out what it was – with the exception of the feature film rights that Paramount Pictures bought many years ago, and the original book publication rights, all other rights to The War of the Worlds remained available and were left to H.G.’s brother Frank who had agents working for him. That’s who my dad and I bought all the rights from. 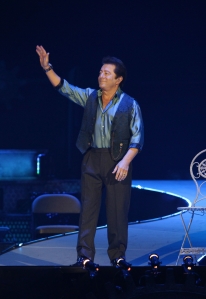 Setting aside the legal logistics, have there been other stories of his which have spoken to you as a pure musician?

I wouldn’t naturally do a follow-on because I enjoyed tremendous success with The War of the Worlds that I’m going to live in the world and the eyes of HG Wells. I appreciate and admire so much of what he’s written: his science was superb, his visions are amazing. I think I’m happy to have been part of one of his works and leave it at that.

The stories that I’ve fallen in love are not necessarily science fiction works. I wrote Spartacus, which is a true story and took me about three years to research it, about a slave over a master, rather than Martians over humans. I tend to look for something that appeals to me on a number of different levels. When I finish the next tour of the War of the Worlds, which will be next year, I’m looking to return to Spartacus and explore it as an arena tour as well as update the album.

What else are you working on that you can talk about?

Nothing really, solely because they’re being worked on in the background when I can get to them. One of them is a potential West End show, a musical story, which I’ve been working with the person putting the story together for about three years. Since I started touring The War of the Worlds, it’s dominated my life. Because of the ingredients which take up my time on different levels, I’ve not been able to say categorically “I can work on something next March”. 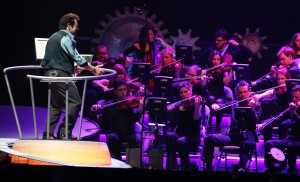 I mixed the DVD of this tour that we did recently starting on the day after the last three shows in Germany. Straight after I finished that, I started composing and recording the music for a TV series, which was the first time that I’d done something away from The War of the Worlds for ages, and it was only because I had a certain window of time that I could take it on. It’s not a lack of desire.

Jeff Wayne’s Musical Version of The War of the Worlds… The New Generation, is out November 25 on DVD and Blu-ray through Universal Pictures. Tickets for the brand new 2014 live tour go on sale November 22 priced from £38.50 and will be available via thewaroftheworlds.com/tickets or at www.livenation.co.uk.

Click here to order Jeff Wayne’s Musical Version of The War of the Worlds – The New Generation: Alive On Stage from Amazon.co.uk

Thanks to Mark Collins for his assistance in setting up this interview; pictures from the show are by Gareth Davies and used with permission.