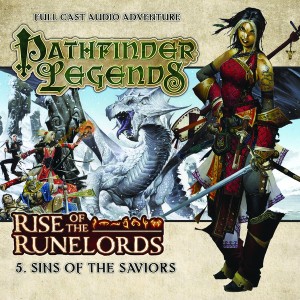 In which the heroes, having learned that Runelord Karzoug (Rowe) has awakened after centuries of magical slumber and plans to re-establish the long-dead Empire of Thassilon, seek ways to defeat the ancient wizard. Their few clues point to a Thassilonian complex called the Runeforge, but can they locate and penetrate this dungeon before Karzoug unleashes his forces upon an unsuspecting Golarion?

Returning once again to Sandpoint to start things off, Sins of the Saviors occasionally feels like it’s retreading familiar ground. This is most noticeable with the Scribbler, a crazed servitor/double agent of two Runelords who, like Karzoug, was recently awakened from magical slumber and is desperately trying to make sense of the world he now finds himself in. It’s a strong vocal performance by Toby Banks, but the Scribbler’s manner strongly recalls that of Duncan Wisby’s similarly crazed character from the earlier Pathfinder audio The Skinsaw Murders.

Also, in the adventure that Sins of the Saviors is based on, there’s much more of the Runeforge to be explored and its inhabitants – essentially champions of each of the seven sings upon which Thassilonian rune magic is based – who must be defeated before the dungeon will yield its secrets to the adventurers. While obviously it makes a great deal of sense for these elements to be discarded so that the story can fit into a one-CD drama, it nevertheless leaves Sins of the Saviors feeling a tad threadbare at times.

While perfectly serviceable in terms of advancing the plot and explaining who the Runelords were and that their return to power would be A Very Bad Thing Indeed, it feels like something special has been lost in the format translation…

Verdict: A somewhat humdrum and by-the-number lead-up to the (hopefully) epic conclusion of a series which started off quite promisingly. 6/10