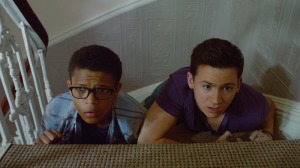 The Nekross send one of their attack animals to Earth…

The scenes where Tom and Benny are pursuing the Grazlak – and you can’t see the creature in question – are undoubtedly the high point of this episode. The low points are the excruciating scenes with Benny’s parents which go on a little too long: we’ve got the point about them much quicker than we’re given credit for.

No doubt there are many who would say that The Sarah Jane Adventures were given more latitude because of the connection to Doctor Who, but I don’t recall having such a major problem with the credibility of the creatures on there. The Nekross king and the species’ connected animals would fit well into a cartoon series, but they look too artificial against live-action actors: it’s noticeable how much more effective the two Nekross are in their scenes than either the king of the Grazlax.

There’s a lot to enjoy about the episode, though: there’s no big deal made about Tom’s change of heart regarding football but it’s a nice throughline from the first episode, and while they may be annoying, Benny’s parents do explain why he’s turned out like this.

Verdict: A bit less sight of the Grazlak would probably have made this more effective. 6/10