Atlantis: Review: Series 1 Episode 6: The Song of the Sirens 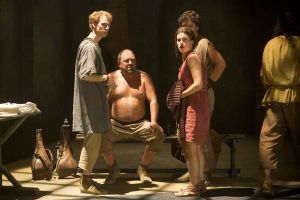 Desperate to get Medusa to fall for him, Hercules turns to magic – with unpleasant results…

As World Fantasy Con duties prevented me from having time to do a preview of this episode, it’s an opportunity halfway through the series to take the chance to take stock of where Atlantis is going. There are some hints in this story that the arc – and with it some explanations as to why Jason is there – is starting to take off, with Hercules effectively being used to entice Jason into a trap whereby he agrees to kill off the Atlantean queen Pasiphae.

The majority of the episode centres on Mark Addy’s Hercules, who’s just beginning to develop a character beyond the boasting about his past and being a butt of fun. Addy has done his best with some poor material up to now, and grabs the chance to work with something a little meatier in this episode (although of course with his character being turned into a pig for part of the time that may not be the best choice of words!)

The attention switches partway through to Jason, but Jack Donnelly still isn’t convincing in the role. He can do the beefcake bits, and the stunts but he’s lost in the scenes with Juliet Stevenson, and cutting to him when he’s told who he’s got to kill didn’t elicit the reaction you might hope for. As for Robert Emms’ Pythagoras, he still has spectacularly failed to be given anything really to do save be a confidant for Jason.

In a discussion over this weekend, a writer with a great deal of experience of genre television agreed that many shows don’t find their feet until the sixth or seventh episode. It takes that length of time for people to gel and for their strengths and weaknesses to become clear to the writing and production staff. Addy is definitely one of the show’s strengths and perhaps bringing this infatuation to Medusa to a speedy conclusion now is a sign that the Atlantis team are preparing him for a more serious role. Certainly, the show needs to tighten up the writing and at some point remember that Jason came to Atlantis from 2013, an aspect that has been all but forgotten in recent weeks.

Verdict: Some glimmerings of hope but still far too much reliance on comedy. 6/10