It’s Doctor/Donna month, with the return of David Tennant and Catherine Tate in three new audios from Big Finish – as well as a new novel from BBC Books. Author Jenny T. Colgan is responsible for the middle audio and the book, and kindly agreed to answer a few questions from Paul Simpson about the spaceman and the temp…

Let’s start with the Big Finish audios – this is the first one you wrote, even if we’ve heard others already. How did you get involved with them?

Well I would constantly namedrop Big Finish in interviews about my BBC Books stuff and mention how much I’d love to work with them so… it was incredibly exciting when they got in touch, completely. Originally it was to write for Catherine, so when David came on board too it was even more of a dream come true.

What was the biggest challenge you faced working in audio?

It’s just been quite a steep learning curve; I’ve been very lucky in having (script editor) Matt Fitton to help me along the way. Just relying on dialogue and sound effects is a real balancing act. Fortunately it’s one Big Finish are absolutely brilliant at, and that’s before you even get to the actors. 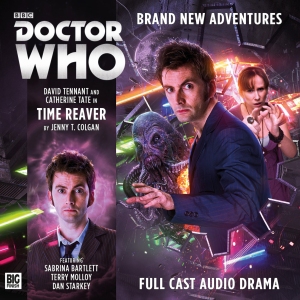 You’ve written both audio and prose for the 10th Doctor and Donna team. What attracts you to them?

I just love those characters. I love the way they relate to each other. I’d be perfectly happy just listening to them chat around the TARDIS console for forty five minutes (that’s not what happens, don’t worry!). So writing dialogue for the two of them is what really attracts me to it: I hope I’m not being overly boastful when I say I reckon I’m getting quite good at it.

Both characters have very much larger than life personalities; what challenges does that present for creating other characters to interact with them?

Yes they are, and that’s part of the attraction; they’re a little gang that you’d love to be a part of ideally, and you can be, kind of, but only for a bit, because they have a different relationship between the two of them that’s quite private, quite exclusive.

It’s not romantic, but they both need each other desperately; she lightens him up and normalises him out of being gloomy and introspective; he makes her realise her own worth. 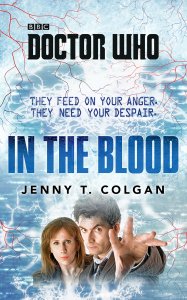 What elements of their relationship did you particularly want to highlight?

With David and Donna (sorry I know that’s not what they’re called, that’s just how I think of them in my head), there’s such a depth of friendship there. Obviously in the real world they’ve been friends for a long time, and I think that comes across on screen/on tape as well, there’s a real sense of in-jokes and shared references, and they don’t need to explain themselves to one another, so I try and capture that. There’s lots of off-the-cuff references to things we don’t see – the bee parade, or the skipping competition – just a lot of things that you can assume they’ve done together that we just don’t know about.

What was your reaction to hearing Gully and co. the first time?

How did the BBC novel In the Blood come about?

And (without spoilers), there’s a key link between the audio and the book; whose idea was that?

Mine! I was very pleased when they said yes. Although I apologise to anyone who read/ listened to them in the wrong order. [Hint – the audio comes first.]

Your short story for River is out in hardback next month; was it your idea to cover Asgard?

Hahaha yes. Oh lord, I knew Steven was writing the Singing Towers of Darillium for Christmas, so I badly wanted to write the companion piece to it. And I said to them, oh, I suppose River will be talking about having children at Christmas then? And they said WHAT? NO, YOU WEIRDO. And I said, well, can I do it then? And they went away and had a think about it and then they finally let me.

Which Doctor/companion combination would you still like to write?

Chris! Chris and Rose. And I badly want to do more 5/ Tegan/ Nyssa /Turlough.

In the Blood is out now from BBC Books

Click on the titles to read our reviews and head to the front page for the chance to win copies – but hurry, the book competition closes Friday 20th at 0001.