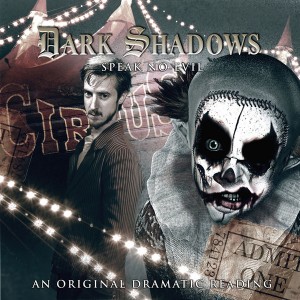 Written and directed by Scott Handcock

In which the circus comes to Collinsport in 1855, piquing the jaded interest of Tad Collins (Darvill), who reluctantly joins forces with Marie the resident tattooed lady (Mangold) in order to retrieve an occult book stolen from Collinwood by a troupe member …

It goes without saying that since some people find circuses and/or clowns disturbing, this makes them perfect material for a Dark Shadows story. As if this wasn’t unsettling enough for coulrophobes out there, Scott Handcock ups the ante by making Benji the Clown mute, only able to communicate through grunts and groans. While not the easiest thing to convey on audio, Antonio Rastelli memorably brings the larcenous harlequin to creepy life.

Speak No Evil takes a bit of a risk by focusing on an older Tad Collins – a minor character in the 1840 flashback storyline who literally appeared in a handful of episodes. On the one hand, he’s a great “blank slate” brought to memorable life by Arthur Darvill in full “rude toff mode”. But on the other hand, Tad’s obscurity would count against him in terms of listener interest and empathy…

In either case, it’s been quite some time since we’ve been presented with as nasty a piece of work as Tad – spoiled, dissolute and bored, yet masking a deep loneliness with arrogance and bad manners. For a while it seems like he’s going to turn out to be yet another misunderstood Collins, so it’s to the script’s credit that things turn out the way they do. Darvill’s American accent resembles the pompous drawl that Louis Edmonds infused so many of his Dark Shadows characters with; whether intentional or serendipitous, it’s a nice touch just the same.

As Marie, Katherine Mangold has palpable chemistry with Darvill, standing up to Tad’s disdain and touching his soft centre even as they discover that there’s far more to her mute clown friend Benji than either of them ever suspected.

Unfortunately, Speak No Evil goes a bit off the rails with an ambitious climax which departs the material world for a “mental” one (in many senses of the word). It suffers heavily from “tell rather than show syndrome”, but I honestly don’t know how else the scene could’ve been conveyed.

Verdict: Its reach may exceed its grasp, but one cannot accuse Speak No Evil of lacking scope or ambition… 7/10

Click here to order Speak No Evil from Big Finish