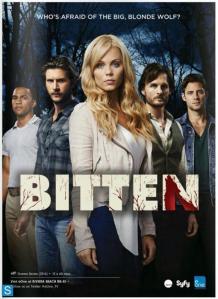 Elena Michaels has to keep part of her life hidden from her fiancé – the part where she becomes a wolf. But when danger threatens her pack’s home, she is summoned to return.

The first two episodes of this adaptation of Kelley Armstrong’s Otherworld series feel very familiar to those of us who have read the books, with a few changes necessary for a television series – notably the loss of the first-person narration by Elena allowing considerable expansion of the scenes in and around Stonehaven, the home of her pack. So far, characters are as we might expect – although inevitably not everyone is how we’ve imagined them – and there are some very neat touches, such as the deference that these very strong physical specimens pay to their Alpha, who is noticeably older than them.

For those who haven’t read the Otherworld books and won’t be as excited by them finally reaching the screen, what does this have to offer? It’s a more adult take on werewolves than the likes of Teen Wolf, but with the requisite amount of time spent with the lupine incarnations. There’s quite a lot of sex involved: the werewolves are passionate creatures, and that’s emphasised by the introductions we get to a lot of them.

It’s got its own clearly defined mythology, which we get to hear some of as across these episodes, and the werewolves themselves are very much not humans who turn into wolves, but their own, sometimes very proud, race, with their own rules of conduct, and their own, strictly maintained, moral code. They co-exist with humans, rather than try to fit in with them – Elena is the exception for trying to have a human life, and the reasons for that will hopefully become clear – we could do with a few more flashbacks to sort the Clay/Elena backstory out sooner rather than later.

Equally overall, Bitten is moving at a sensible pace, rather than trying to cram everything into one or two episodes – the hunt for the mutt who is killing humans around Stonehaven is now stretching into a third episode, which allows the characters to develop and the world to be built.

The effects are done well and with the amount of nude rear shots in the series, the gyms in Toronto, where it’s filmed, must be doing roaring business! There’s the odd moment where you’re not sure which wolf is which “human” – and in the teaser of the first episode, of course, this is done deliberately – but overall, as the scene between Clay Danvers in human form and Elena as a wolf shows, it’s clear.