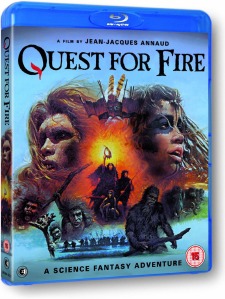 When the most important secret of all is lost, anything and everything must be done to restore normality…

Anthony Burgess and Desmond Morris in some ways are the real stars of this 1981 caveman movie which finally gets a worthy treatment on Blu-ray: the pair were responsible for the spoken language and the body movements used by the actors which ensured that the story, which is all about communication, was very clearly told without relying on clever dialogue.

It means that you become more invested in the characters as they go on their perilous journey and despite the award-winning make up used to depict the Neanderthals, and the other versions of man encountered along the way, expressions are still clear, allowing, particularly, Ron Perlman and Rae Dawn Chong to portray their emotions. (The commentary track featuring these two alongside Michael Gruskoff is the better of the two provided – listen to theirs before that of director Jean Jacques Annaud.)

If you’ve been put off this sort of movie by less subtle versions – Clan of the Cave Bear comes to mind – then definitely give this a try. Based on J.-H. Rosny’s novel 1911 novel, Quest for Fire is science fantasy of a different sort, and well worth watching.

Verdict: A fascinating and engaging experience. 8/10

Click here to order Quest for Fire (Blu-ray) from Amazon.co.uk