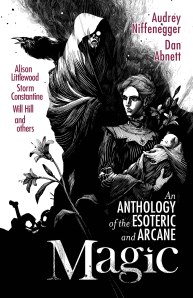 An Anthology of the Esoteric and Arcane

An intriguing collection of short stories on many different forms of magic.

Volumes like this, with a multitude of styles and authors, always have the advantage that if there’s a short story you’re not keen on, for whatever reason, there’ll be something very different along in a few pages’ time. However, as readers of previous collections edited by Oliver might expect, there aren’t any duff tales within this anthology.

Some stories give you a tiny glimpse at a much wider canvas – Robert Shearman’s haunting “Dumb Lucy”, Will Hill’s cleverly structured “Shuffle”, Steve Rasmic Tem and Melanie Tem’s “Domestic Magic”, or Liz Williams’ “Cad Coddeu” – while others are self-contained anecdotes (Gail Z. Martin’s “Buttons”, for example).

There’s outright horror (stand up Thania Niveau, Christopher Fowler, Sophia McDougall and Gemma Files) and magic as part of day-to-day life, whether it’s being used to deal with former lovers in Storm Constantine’s neatly-titled story, or in politics (Dan Abnett) and less salubrious employment (my personal favourite tale, Lou Morgan’s “Bottom Line”, and Sarah Lotz’s “If I Die, Kill My Cat”, both “worlds” visited in this book that I’d like to see more of).

Magic opens with a tale from The Time Traveller’s Wife author Audrey Niffenegger which riffs off a real link between Holmes author Conan Doyle and the fairy folk; and there’s a genuine historical figure also in Alison Littlewood’s “The Art of Escapology”. But whether the stories are set in contemporary Britain or a fantasy landscape, this collection isn’t trying any sleight of hand to keep you interested.

Verdict: Perfect Halloween fare that will keep you reading during the winter nights. 8/10

Click here to order Magic: An Anthology of the Esoteric and Arcane from Amazon.co.uk