Raffey Cassidy is a young actress with an already impressive and rapidly growing list of film credits. As the youngest ever actor to feature in Screen International’s Stars of Tomorrow, her credits include Universal Pictures’ Snow White and the Huntsman, opposite Charlize Theron, Kristen Stewart and Chris Hemsworth, and Tim Burton’s Dark Shadows with Johnny Depp for Warner Brothers as well as Mr Selfridge for ITV. She chatted with Paul Simpson about her year on Tomorrowland…

What did you think of the film when you finally saw it all put together?

Well, there were things in there that I didn’t know were going to happen, so it was really cool. I really enjoyed the message behind it which was, as an individual you can do anything really, and to be optimistic about things. I thought it was really good.

What was your favourite part of the film that you weren’t in ?

I really liked Thomas’s sequences as young Frank. That was really cool because it showed what Frank was as a little boy.

You were playing opposite two different actors playing the same character – were there things that Brad asked you to do that were the same with both, or were you doing Athena as you saw her?

It was very cool to be in one era and then the next but be the same really. When Frank is young, she kind of treats him the same as when he’s older – or maybe, more mature. I think Brad saw how I did it and then gave me some notes if he wanted some things the same.

In your scenes with Britt [Robertson] – particularly where you’re explaining things to Casey after you’ve jumped into the truck – often you’re the adult, and she’s the child; were you deliberately doing that?

Yes – I suppose in actual fact Athena has had more experience, and she’s like a motherly figure. In a way, she was the boss of Britt there. On the day, I knew she needed to be very precise in what she wanted her to do, and be a bit of a boss.

How did you and Britt get on?

It was really fun. I got on with her so well. Before we started shooting I got to get to know her, and that made it better in the scenes as well, that we had that connection, which was really cool.

What was the training for the physical side of the film like?

What was the coolest thing you learned to do?

The wire work was cool. I got to do steps on wires and stuff like that. Also when I was training I learned how to break a board…

Have you had to use that since?

No, not at the moment! 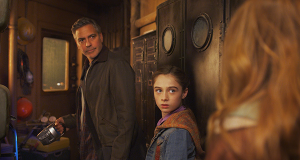 Oh no, at home I do gymnastics and swimming, which I love. When I got to do martial arts, that was an extra thing, but it was fun to be able to learn. I like doing lots of physical stuff.

Which martial arts were you learning?

Mixed. We went through various martial arts stuff, and I earned my yellow belt!

Are you going to carry on with it?

Yes I’d really like to carry on so I don’t forget.

Did you have a tutor?

I schooled out there and did lots of schooling, but getting to do all of the stuff on Tomorrowland was well worth it!

How long were you involved?

Overall, it was probably about nine months… probably more than that, about twelve.

What do you think you learned during the process?

(pause) I learned from Athena to be optimistic, that there’s always a bright side to a bad situation, and always to be happy.

Were there scenes that you did as an actor that you’d not had to do before?

I’d never done stunts on the level that I did on Tomorrowland. That was really cool, getting to do all of that – I was very lucky to get to do a lot of things.

They would have looked a bit odd in Mr Selfridge!

So what made you want to be an actor?

My brother went into an audition and I happened to be outside. They said they’d needed a little girl for the part and would I like to come in and try – so I did, and got the part. And from then on I just wanted to carry on. It was something I enjoyed and had a passion for.

What’s the big attraction? Some actors like to pretend to be somebody else, because it’s more fun than being themselves; others like being paid to play and use their imagination – which are you?

Can I go with both? I love playing characters that have never been made before and getting to create their backgrounds, but I also like to be able to play people, watching them and what they do.

Do you watch sci-fi films and TV?

Yes, I like cool weird stuff, so sci-fi, yes I like those kinds of films because they’re interesting and they can also be funny.

If somebody says they want you to play a part in their film or TV show, what sort of things are you hoping for?

What was the biggest challenge for you in Tomorrowland – you said the stunts were something new, but what did you find hardest?

Did you act her differently for those versions?

I think she sat up straighter, when she had been given a task to complete rather than doing her own thing, but her personality didn’t change too much. She was still the same person.

If you met her in real life, what would you think of her?

I think she’d be very strict at times, and fun at other times – a cool, wise character.

Do you think you’d be mates?

Are you filming at the moment, or at school?

Just doing school at the moment; I’d love to do something else which I hope would be as fun as Tomorrowland.

If you were describing Tomorrowland to someone who knows nothing about it, what would you say?

I’d say, go and watch Tomorrowland because it is an amazing film which has so many different things in it: action, comedy, so many things that take you on an amazing journey, and you walk out feeling optimistic, so go and buy it!

Tomorrowland: A World Beyond is available now on Disney Blu-ray TM & DVD.