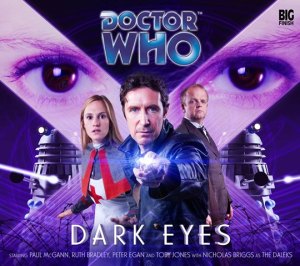 Reeling from the deaths wrought by the Daleks, the Doctor flees to the end of the universe in search of hope. But is he placing his trust in the wrong person to find that hope?

To quote Molly O’Sullivan’s father, here’s an idea and three halves. Somebody’s obviously been putting something in the water at Big Finish over the past few months, because once again, they’ve produced a cracking box set, which charts the era in the Eighth Doctor’s life after the tragic events of To The Death.

Sensibly creator/director Nick Briggs has avoided the temptation to resurrect Lucie Miller or use the events of that story as more than a springboard emotionally for the Doctor. Dark Eyes is a Doctor Who movie on audio: stretching from the trenches of the Great War, to the 1940s and 1970s, and across time and space. There’s political intrigue for those who miss the Gallifrey series; unusual Dalek activity – very unusual Dalek activity in fact; a well-drawn new companion in Molly: someone with a secret is nothing new to Who (such as Turlough, or even Lucie, to an extent), but it’s very well hidden in plain sight.

Paul McGann seems to revel in forging working relationships with new companions: the zest of the start of the Lucie adventures, or the initial Mary Shelley stories, is here once again. Unlike the occasional member of the TV cast, he has never “phoned in” his performances, but by the end of the Charlie Pollard run, the tiredness didn’t seem to spring purely from the character. But here, there’s a wealth of range – from exuberance to despair. At the end of To The Death, you could sense that the Doctor who used the Moment at the end of the Time War was slowly emerging, and this story charts the continuation of that process: true, he has opportunities here that he consciously avoids taking, but there are reasons why he does so. What if those reasons were removed?

Ruth Bradley, best known to genre fans previously for her role on Primeval, makes a feisty companion, with her letters home to her mother, her annoyance at being teased, and her willingness, born perhaps from what she has seen in the trenches, to do what is necessary for a greater good. Although this is a “concept album” and self-contained, hopefully she will be back – maybe not immediately, but at some point in the not too distant future.

The rest of the cast are equally strong: Peter Egan and Toby Jones make excellent foils for McGann, Bradley and each other. I was actually hoping the reveal regarding Jones’ character would be something different, simply because of the inevitability then of what would happen towards the end of the story, and in the hope (that word again!) that he could prove a recurring nemesis for this later Eighth Doctor.

Kudos too to Briggs and Andy Hardwick for the production: the sense of scale is never lost, nor is there ever that slight disconnect that occasionally happens between the studio recording and the background.

Verdict: I said Counter-Measures was the best box set Big Finish had produced; this is its equal.  9/10