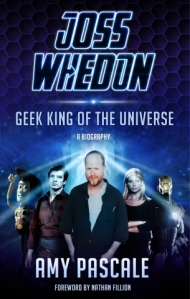 One of the great pleasures of my time working as editor of DreamWatch in the late 1990s was the chance to visit Los Angeles, where, at the time, many SF shows were in production. Sometimes these set visits were almost despite the best efforts of the studios involved (the invites to Babylon 5 came direct from JMS, much to the chagrin of the official magazine!), while others, such as Buffy and Angel, were with the full cooperation of the Fox PR people. On one trip out to the Santa Monica lot for Buffy, we were surprised to be offered time with Joss – and before getting into the important topics (which at that point was the death of Joyce Summers), he had a complaint to make. Why were the envelopes containing his copy of the magazine addressed to Joss “Wheldon”?

There’s something quite unusual about that (not the mistake; that was just a cock-up): a producer whose attention was required on about fifteen different things at once noticed that an envelope (not even the issue itself) was wrongly addressed. But it was clear from the way he talked that not only was he aware of the magazine and the other British imprints of the time, but was aware of our differences, and knew the approach the interview was likely to take.

That’s not an anecdote in Amy Pascale’s excellent and well-written account of Joss Whedon’s life, but it could easily have been – she’s spoken to dozens of people who worked with or encountered Joss across his career, and the picture they draw is of a man who is passionate about his work and the way it’s treated. Stories that were confided in confidence nearly twenty years ago are now public record (Joss’ reaction to Alien Resurrection, for example), and colleagues don’t hold back in their feelings about him and the way he works.

The story is told chronologically rather than thematically, which means that we get quite a bit about Joss’ upbringing and education in the UK; you may not follow the conclusions that are drawn – not everyone with similar pasts go on to come up with such a diverse range of projects – but the information is helpful in working out for yourself what drives the man.

It’s also the story of the shows which Joss created – there are anecdotes here about specific key episodes of the various series which, while illustrating the milieu in which Joss works, also give an insight into the way television and films have changed in the last twenty years.

Verdict: Highly recommended look at one of the key players in the geek world today. 9/10

Click here to order Joss Whedon: Geek King of the Universe – A Biography from Amazon.co.uk