Review: An Audience with Neil Gaiman and Audrey Niffenegger 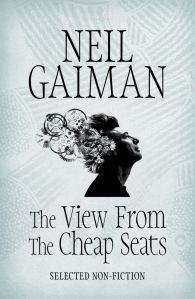 Inside The View from the Cheap Seats…

Any new work by Neil Gaiman is a big deal – how many authors do you know that could convince their publisher to release a 500-plus-page brick of a tome of non-fiction? And so its testament to his loyal following that not only are Headline Books running an interview session on the day of launch, but providing a signed copy of the hardback to all in attendance.

Held in the working church/community and arts centre of North London’s Union Chapel in Islington (Neverwhere fans did not miss the connection), Gaiman was interviewed by bestselling author of The Time Traveler’s Wife, Audrey Niffenegger. And if you couldn’t make it to the sold-out event you could watch it from Neil’s Facebook page and Headline Books’ YouTube channel. Did I mention that this was a big launch?

Walking onto stage in his trademark black and grey fatigues and impossible mop of curls, Gaiman had young son Ash perched on his hip. They introduced Neil’s wife (and Ash’s mother) Amanda Palmer and her father to perform a song – she joked that Neil would get reciprocal treatment at her London gig later that week.

And then Audrey and Neil settled in to their seats and just chatted and talked. The authors have held court in this manner many times before and it’s this familiarity that brings out the best in both. Totally at ease in each other’s company, neither is awkward and can add a layer of depth that even the most well-researched interviewer would struggle to find.

Neil revealed that he’d sent the body of his non-fiction work to a third party to subjectively read through and pull out the best. Around a third made it to the final book. Could it have been longer? Maybe, but as he pointed out, the current doorstep is already so big it could be used as a weapon.

One of the biggest delights at a Gaiman talk is his willingness to read from his work, and Neil chose to read extracts on the freedom of speech and a British take on Halloween. Unlike many authors, he opts to narrate his own audio books and he shared the challenge of delivering an authentic Lou Reed impression. He suggested that the curious could download the book to see if he pitched it right. He also revealed how he teared up in his early recordings of the piece dedicated to dear friend Terry Pratchett.

At 70-odd minutes it all seemed over too quickly; there was enough passion and interest in the room to fuel the discussion all night. But with a baby that needed sleep and a sequel to Neverwhere that wasn’t going to write itself, now was the time to draw things to a close.

With Likely Stories on Sky Arts, How to Talk to Girls at Parties in the can as a movie, American Gods in production as a TV show from Bryan Fuller and multiple new editions of his books planned for release this year, there’s never been a better time to enter this wonderful mind. The cover of the book suggests it is full of cogs and wheels – I wouldn’t be at all surprised. But what cogs! 9/10