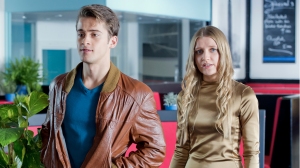 To gain information about the Clark family, Zac invites Eve on a date…

Eve’s emotional development continues in leaps and bounds – just go back and watch the first couple of episodes again to see just how far she’s come in such a short space of time – and the show is dealing with some very familiar teenage issues. The dialogue between Will, Lily and Eve seems natural (allowing for the latter’s odd speech patterns), and the camera seems to almost accidentally catch some brief facial expressions from both Oliver Woollford and Eubha Akilade that display their characters’ true feelings – a nice directorial touch.

Poppy Lee Friar promised in the interview a few weeks back that she’d get a chance to sing in this episode, and she gives a bravura performance which manages both to project the song well and stay in character as Eve. The kiss at the end was telegraphed way in advance, but still worked well – as did Will, Lily and Zac’s reactions – and it’s interesting to note that it takes Eve far longer to snap out of the emotional state she’s in over Zac’s betrayal than over anything else.

I’m hoping that there are rather more repercussions from Katherine and Zac’s hacking of Nick’s home computer than we saw. Katherine’s crossed the line here, but Nick’s reaction is muted – perhaps because he knows that he is hiding secrets, just not where she was looking.

Verdict: Another enjoyable instalment that progresses plot and character well. 8/10