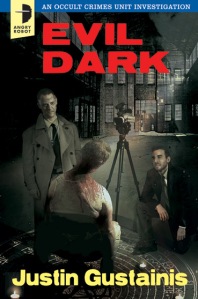 Stan Markowski of the Scranton P.D. Occult Crimes Unit is back, investigating some snuff movies with an horrendous difference…

If you enjoyed the first Occult Crimes Unit investigation, you’re going to love this, which is more of the same, but suitably ramped up. This time, the precarious balance between the supernatural world and mundane human existence is at risk, and it seems as if Markowski together with his vampire partner are about all that stand between mankind and a grisly Armageddon.

In the hands of some authors, this would be a unremittingly grim prospect,  but Gustainis uses the typical cop’s black humour, as well as the ability to step outside a situation, to provide an objective viewpoint and avoid the pitfalls of doom and gloom. Sure, as a reader, you’re more than well aware of what’s at stake – the few descriptive passages regarding the snuff movies do that extremely well – but, like Markowski and his colleagues, you’re able to keep an eye on the bigger picture, and you’re kept groaning at the slightly skewed version of history (watch out for the Bond references, as well as the reworkings of various TV shows).

Markowski ends the book in a considerably nicer situation than he begins it – but as he notes himself regularly, that’s when the excrement starts heading toward the extraction unit…

Verdict: Another hit for Sergeant Stan! 8/10