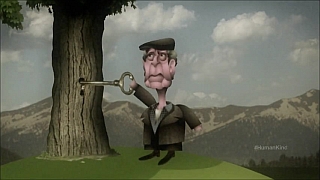 Olivia picks up a giant magnet and Peter fights Widmark, while Walter takes a ‘trip’…

This final season of Fringe has been slow to get going, and even with just four episodes left it all feels a little underwhelming. A case in point was the exciting idea that Peter might be altered through his use of the Observers implant technology, as heavily hinted by the conclusion of the previous episode where he seemed to be losing his hair. However, following some nagging from Olivia and a tussle with some Observers, Peter changes his mind and removes the implant. That rapidly concluded a very promising storyline in a terribly arbitrary manner.

Olivia’s quest (in ‘The Human Kind’) for an electromagnet is spurred by one of Walter’s tiresome plot motivating Betamax videotapes. Her encounter with the supposedly spiritual Simone is sophomoric at best. Her blather about knowing the future doesn’t seem to lead anywhere, and she seems to be a stand-in for the annoying Sam Weiss, who is bizarrely found as a skeleton (in ‘Black Blotter’) in an obscure rebel hideout. None of this adds up to any great revelation or an engaging, dramatic whole, unfortunately. This is symptomatic of so many episodes this season.

Walter’s acid trip is much better, complete with a superb Monty Python/Terry Gilliam-style animated interlude revealing how Walter’s brain works sometimes. Several past elements return in this episode, including Walter’s visions of his old lab assistant (who seems to be encouraging Walter to act against his own best interests, as a kind of evil angel), the radio found in the pocket universe a few episodes before, and the Observer boy (from the first season episode ‘Inner Child’). It might be rewarding to long-term, dedicated fans, but those less involved in the minutiae of the series might be getting a bit lost about now.

With a single episode before Christmas, and three in the New Year, including a double bill finale on 18 January, Fringe doesn’t have long to pull this season’s plot lines together. On the evidence so far, though, the whole last season is looking like something of a missed opportunity to cap off an innovative show with a truly memorable final year. Shame.

Verdict: I’ll have some of what Walter’s taking, please…