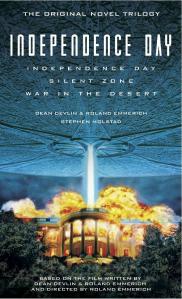 Titan, out now as part of the Independence Day Omnibus

The aliens’ plans aren’t over when the mothership blows up…

I suspect reaction to this 1999 novel now will be very different from when it first appeared, since it reads completely differently now we know the aliens’ capabilities and plans as seen in the new movie. Picking up on that one scene in the first film where a British officer picks up the Americans’ plans via Morse code – which Molstad wrote various bits of backstory for in his original novelisation – this doesn’t just deal with an alternate viewpoint on the events of the original movie, but takes it to the next stage.

There’s a lot of extrapolation of the aliens’ abilities based on quite a small amount of material in the 1996 film, but pretty much without exception it ties in with what we see in the 2016 incarnation – particularly the scenes in that where Jake, Dylan and co. are inside the alien vessel. The idea that they’ve got more than one plan up their sleeve is something that fires Dark Fathom as well, but that story, although set around the same time as this, was written nearly two decades later! 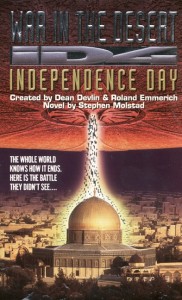 If you were disappointed that Silent Zone didn’t contain the humans vs aliens aspect of the original film, then this more than makes up for it. It’s of the same ilk as Independence Day UK, hitting some of the beats of the blockbuster while charting its own course, and Molstad’s style suits this sort of tale well.

Verdict: A surprisingly enjoyable ID4 story that dovetails very neatly with the revelations of Resurgence. 8/10