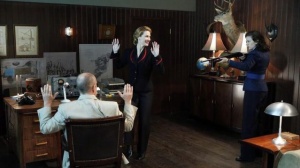 And so ends what should, by rights, be just the first season of adventures for Hayley Atwell’s Peggy Carter. We know from the new Avengers: Age of Ultron poster that she’s turning up in that movie, but unless it’s in flashbacks, it’ll be the older Peggy of The Winter Soldier, so make the most of this episode just in case it’s the last we get of “contemporary” Peggy.

It’s a strong episode to conclude on: Dominic Cooper guest stars as Stark, but doesn’t dominate proceedings. The story may be about Howard and his inventions, but its focus is on Peggy and her SSR colleagues – there’s a great scene for Daniel Souza and Jack Thompson with Dr Ivchenko (or Dr Faustus / Dr Fennhoff, as we really should call him) – as well as the relationship between Peggy and Jarvis, one of the strongest elements of the whole miniseries. James D’Arcy and Atwell spark well off each other and the restrained emotion of their final scene together is played perfectly. The fight between Dottie and Peggy also lives up to expectations with some intriguing dialogue from the former which implies her loyalties might not be quite as we think.

There have been various links to the Marvel Cinematic Universe across the whole series, and we get both a key prop and a major character turn up in this finale (no spoilers though!). There haven’t been links to Agents of SHIELD, slightly to my surprise (well, not in terms of their ongoing storyline anyway), but this story did serve to tie off some loose ends from the first Captain America film, with a number of characters getting to achieve some closure (notably in a scene that deliberately follows the structure of the ending of that movie).

According to the producers, they don’t expect to hear about a renewal for a few weeks yet, but based on this first season, let’s hope for many more trips back in Peggy’s life.

Verdict: A strong finale, with appropriate endings for many of the characters showing what they’ve learned (or in some cases, not!). 9/10