Review: Doctor Who: Books: Terry Nation: The Man Who Invented the Daleks 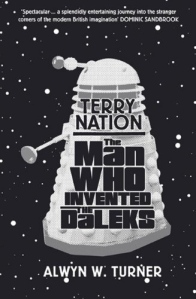 Alwyn Turner’s biography of Terry Nation is also a cultural guide to the era in which the writer worked. If you’ve got an interest in the radio and television landscape of the 1940s onwards, then you’ll get a kick out of this, particularly its insights into the way in which ALS (the group of scriptwriters centred around Spike Milligan) had sway over the BBC during this period, and how the glory days of ITC came to an end.

This isn’t a hagiography: Nation’s well-documented faults (which boil down to laziness in a lot of instances) aren’t glossed over. His habit of repeating tropes from story to story – eventually leading to the infamous comment from Barry Letts and Terrance Dicks that he had provided them with a great Doctor Who story, the only problem being that he’d sold it to them three times already – is dissected, and the horrendous moment when the same story appeared on the same weekend on two separate ITC shows is recounted.

Turner has done his research, not just into Nation’s work but the material he adapted: there are good descriptions of the literary Saint and the Baron (although I think that Dr Sardon, ‘The Man Who Liked Ants’ from a Leslie Charteris story, gets mentioned more often in this book than anywhere else outside copies of the original story!). There’s the odd minor misquote, but nothing at all serious.

What is also interesting – although it’s covered quite quickly – is the description of Nation’s work in the States. From other works I’d had the impression that he was a key contributor to the Richard Dean Anderson series MacGuyver, but this clearly wasn’t the case.

Verdict: In an era where it seems that everyone with a connection to Doctor Who is publishing (auto)biographies, this stands out as a class act. A companion volume on Verity Lambert would be welcomed.  9/10

Click here to order Terry Nation: The Man Who Invented the Daleks from Amazon.co.uk