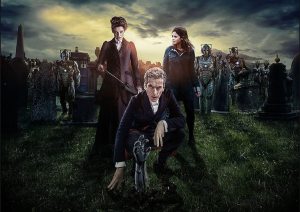 Is there any way of stopping the combination of the Master and the Cybermen?

And so we come to the end of Peter Capaldi’s first season as the Doctor, and a lot of the threads that have been sewn through the eleven episodes to date are brought together. There’s a lot to absorb in this nearly hour-long episode, starting with something that will make you wonder if everything really is about to be turned on its head even before the title sequence plays, and culminating with some scenes that may bring a lump to the throat of long-term fans.

As with Dark Water, if you’ve not liked the way the season has played out so far, you’re not going to be converted by Death in Heaven. Michelle Gomez is seriously over the top as Missy/the Master – there are elements of John Simm’s portrayal, but little of the classic series version of the villain – and the Cybermen are used very differently from any time we’ve seen them before. There continue to be some conceptual links to the Colin Baker Dalek story, as well as to Doomsday, and it’s good to see the return of Kate (Lethbridge) Stewart as well as Osgood.

Although there’s a great deal of spectacle, and a world-threatening situation, much, as ever, comes down to the relationship between the Doctor and Clara, and the lengths each will go to for the other. “Am I a good man?” the Doctor asked at the start of the year, and you certainly get an answer of some description from this – as well as an insight into some other sides of his personality (one of Capaldi’s solo scenes is dialogue-free but not for one second do you doubt what the Doctor is thinking or feeling). Rachel Talalay brings a cinematic eye to proceedings, and I’d love to see these two episodes on the big screen.

It may not be the season-closer that everyone would like – there are elements to it that are on the borders of good taste, although, as with Dark Water, certain caveats are contained within the dialogue which should affect how the concepts are regarded – but it’s definitely what Moffat has been building towards all year, and rather than try to be too clever, he’s produced a solid story with some blackly humorous moments.

Verdict: Spectacle, threat, emotion and heartache – the ingredients for a finale that will be long remembered. 8/10