Feature: Saying Something New About Werewolves 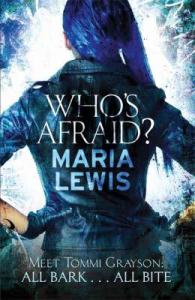 Sydney based professional journalist Maria Lewis’ debut novel, Who’s Afraid?, out now from Piatkus, looks at the lycanthropic trope in a new way. Here Lewis explains how and why…

At this point, werewolves have been around as long as any classic monster. They don’t quite have the sexiness (or sparkle?) of vampires or the social commentary of zombies, yet they’ve remained pretty bloody prevalent in pop culture over the past few centuries. So how do you say something new about them? Simple: you say it as a woman. Traditionally werewolves in stories and legends and film and comics and literature have always been depicted as ‘male’. Yet if there’s anyone who’s gonna understand bloodbaths and turning beastly for a few days each month, it’s women. Alas, like much of society, lycanthropy has been reserved as a bit of a boys club. Perhaps that’s why I had so much fun clawing at that glass ceiling with Who’s Afraid?

My debut novel follows almost exclusively the story of Tommi Grayson, a young biracial woman who learns that she’s a descendant from a long line of powerful werewolves and has inherited that particular furry trait. Tommi is the entry point to a world rich with lady lycanthropes as the series continues, with werewolf women of all ages, races and orientations. And my reasoning was simple: I love werewolf stories. Always have. As a kid I grew up obsessed with them and consumed any werewolf bits and bobs I could get my hands on: whether that was The Wolfman and An American Werewolf In London, or The Howling III and Teen Wolf on a bad day. Yet it became apparent pretty quick that women’s stories were rarely being told amongst this lot.

Sure, there are shining exceptions – Ginger Snaps, When Animals Dream, Blood & Chocolate and Bitten among them – but generally speaking lycanthropy was a sausage fest. Even historically, accounts of female werewolves are largely non-existent: there’s the Werewolf of Bedburg Peter Stumpp, Jean Grenier, the Werewolf of Poligny and numerous other (mostly) European tales but it’s documented as a male phenomenon – something that has filtered into pop culture. Which is… weird. There seemed to be a pre-conceived idea that women couldn’t inhabit the monstrous physicality of a true flesh-ripping, skin-splitting, bone-breaking beast.

I disagreed. Furthermore, I wanted to see a female werewolf story that truly embraced the idea of the werewolf and all those accompanying themes of duality. I wanted to embrace the feminine grotesque so there would be a version of a female werewolf who wasn’t characterised by cute, glowy eyes and adorable furry ears: she was a physical force to be reckoned with who could tear you to pieces if she was that way inclined. I wanted a heroine that was a monster, the kind of monster men so often get to play on the page or on the big screen. Yet I also wanted someone who could reconcile that side of herself with who she was the other 80 per cent of the time. After all, we’re all living with a monster instead of ourselves – but what if that monster was, quite literally, a monster?

Who’s Afraid? is out now from Piatkus. Read our review here 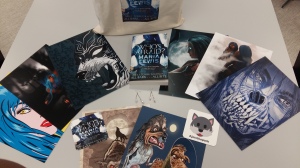 And click here for a chance to win a goody bag of Who’s There? material