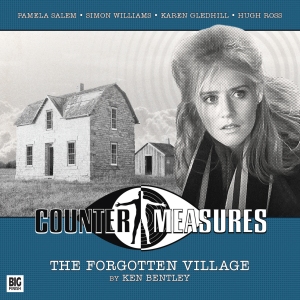 Sir Toby insists that Allison heads home to her rural Herefordshire village after her father falls ill – but does he have ulterior motives for wanting one of the Counter-Measures team to be there?

Ken Bentley’s debut as a writer on Counter-Measures is an assured piece which shows his clear grasp of the characters, as well as a desire to make them increasingly three-dimensional. We get some insights into Allison Williams in this when she goes home which explain a lot about her sometimes prickly attitude and her occasional poor choices.

Although the first part of the story focuses on Allison, things move quickly and she needs to call for help from Rachel Jensen, whereafter she and Gilmore take the lion’s share of the second. There’s a set-up which will bring a smile of recognition for anyone who knows the Jon Pertwee era, with some familiar interaction between the scientific and military branches of the secret organisation!

Sir Toby isn’t ignored either: one of the underlying themes of this season is whether he can be trusted or not, and there’s evidence for both sides in this story. He may not deserve the venom heaped on him at the end – but there’s a possibility that he does. I’m hoping that this is a facet of the series which will be brought to a conclusion soon: there are only so many times this sort of confrontation can be played out without it losing dramatic effect.

As well as a “Daemonic” feel, this episode also evokes the spirit of John Wyndham quite a bit – we get to know characters as they delve into (or are thrown into) an unusual situation and watch as they try to understand what’s happening to them. It’s an approach that would normally need more time devoted to it than it gets here, but Bentley pulls it off both as writer and director without the story feeling rushed.

Verdict: An impressive debut that provides some interesting insights into the team. 9/10