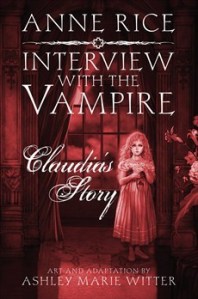 Anne Rice created Lestat and other unforgettable characters in her novel Interview with the Vampire back in the 1970s. Now a new take on the material has appeared. Interview with the Vampire: Claudia’s Story presents a retelling of the events of that novel from the point of view of the eponymous child vampire in a new adaptation by Ashley Marie Witter. To mark its publication, Anne Rice answered some questions from Paul Simpson…

How involved were you with the preparation of the graphic novel, in terms of the choice of adapter, and how she went about it?

I reviewed the art work from the beginning and the dialogue, and I found it very good, faithful, and beautiful. I do not closely hover over an adaptation, but allow the adaptors to do their thing. I look for fidelity to the original work.

This is based on a book that was published over 35 years ago – did the perspective from which it was written give you new insights into the characters?

I actually never look at an adaptation for insight into my characters. But now that you ask me about this, perhaps I’ll reread Interview with the Vampire: Claudia’s Story. What I look for is faithfulness. I am very close to these books, and discuss them all the time with readers, and so they are ever fresh in my mind, though written years ago, I recently re-read most of the Chronicles.

A number of your stories have been adapted to this medium – would you be interested in writing directly for it?

I would love to. I am a novelist, of course, first and foremost, but all of us have stories I think that we have not been able to work into novels. I’d love to do something entirely fresh just for the graphic novel market.

Perhaps such an opportunity would arise. I’ll think about it.

What attracted you to writing about the supernatural in the first place? Does it still hold the same attraction now?

The supernatural has always interested me more than anything else, and I experience an intensity when reading or writing a supernatural story that is special and consuming. I’ll never tire of it. When I was writing my Christian books, the supernatural element was front and center — the uniqueness of Jesus as God and Man; the uniqueness of angels visiting the earth, trying to answer prayers. I recently published The Wolf Gift in which I explored a werewolf for the first time, and I was deeply involved in his conscious experience of his wolfen powers.

Do you think we’re oversaturated with vampires at the moment, with Twilight/True Blood/five thousand novels hitting the stores each year? Or do you think it’s cyclical, and this will burn itself out for a bit, and then return in a few years’ time?

I’m not sure that the market for vampire fiction is oversaturated. I think that the audience for supernatural fiction was neglected for decades, perhaps a century.

There was a time when the only “serious” fiction had to be “pedestrian realism.” It was rather maddening actually. Well, now all that has changed. Publishers know people want speculative and imaginative fiction; they crave novelty and originality.

Of course there are trends; but detective novels and westerns long ago settled in and never go out of style; they are often on the best seller lists. And I think vampire fiction, and supernatural fiction in general will now join them and we will always have it.

Undoubtedly new authors change things. Look at Fifty Shades of Grey. It surprised everyone and now there is a respectable market for erotica and publishers are interested in it for the first time in maybe fifty years. Authors change the name of the game. Something entirely “new” is written, and a trend is started. 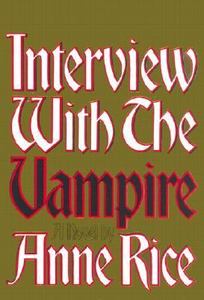 The publishing industry is going through a period of turmoil at the moment; do you think the increase in self-publishing (and often the consequent lack of editorial involvement) will have a major effect on the books we read?

Yes, publishing is in turmoil, and self-publishing is more significant than ever in the past. Will it change things? I’m not sure. The fact is, a lot of us self-edit all the time as we write. We may love the feedback and insights of an editor, but no author wants to be controlled by an editor and forced to write what the editor says to write.

And of course indie authors self-publishing can hire expert copy editors and style sheet editors on their own. Will indie authors follow trends as closely as publishers have in the past? They just might. On the other hand, we might get more surprises now — with authors able to enter the market with unpredictable and unclassifiable books that publishers wouldn’t have accepted in the past. I don’t know how it will all shake out. Publishers were gatekeepers. They controlled access to readers. Now they don’t so much. This will benefit some highly original authors, obviously. But will their books sell? The reader ultimately determines what sells. Getting your work to the reader is the name of the game. But how it will work out I don’t know.

Thanks to Caitlin Raynor at Hodder for her help with arranging this interview.

Click here to order Interview with the Vampire: Claudia’s Story from Amazon.co.uk