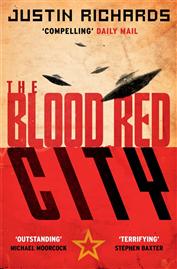 Why are both humans and Vril searching for mysterious double-headed axes?

Justin Richards’ follow-up to The Suicide Exhibition jumps straight into the action midway through the Second World War, and maintains the pace throughout, with the team involved in places as far afield as Los Angeles and the heart of Russia. Unless it’s important for a character moment, there’s little time devoted to the journeys themselves, another element these books share with the Indiana Jones movies – when the film/TV version happens, these bits will be represented by an aircraft/ship moving on a map, losing nothing from the text along the way.

Richards has done his research, not just into the battles of the war, but also their effect on the people caught up in them – the portion set in the eponymous Blood Red City brought back memories of reading Antony Beevor’s terrific book about the siege. (We’ll move swiftly past the misnaming of Embankment tube station – one of my pet bugbears about stories set during this period!) He doesn’t hide the nastiness and the sacrifices required in war either: some of the most resonant moments come in brief point of view scenes when people do what has to be done, rather than what self-preservation would normally dictate, or what standard morality would suggest.

As with the first novel, the story effectively throws derring-do, magic (in the form of Aleister Crowley and his minions), espionage and science fiction into the mix with the war, but does it in such a way that it feels credible. The more outré elements can be hidden from the public in part because of the secrecy that surrounds the conflict – there’s a chase through Central London which culminates with a UFO rising from the river that can simply be glossed over!

Verdict: A very effective and thrilling continuation of the saga – more please! 8/10

Click here to order The Blood Red City from Amazon.co.uk