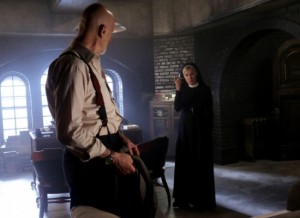 During a storm, another escape is attempted. Sister Mary Eunice (or the demon possessing her) expresses herself, while Dr Arden indulges in a little unnecessary surgery…

Broadcast during Hurricane Sandy’s impact on east coast America and on Hallowe’en night, this instalment of American Horror Story could not have been better timed.

The present day scenes move on apace, as the original two explorers of the derelict asylum are taken out by a pair of thrill killer ‘bloody face’ impersonators—inevitably, they come face-to-mask with the real deal.

Back in 1964, there’s another escape attempt (they better be careful this doesn’t turn into an attempted escape of the week, like The Prisoner), a drunken Sister Jude has a close encounter, and Dr Arden gets to practice his surgical techniques, removing both of Shelley’s legs!

Jessica Lange—predictably—steals the acting honours again. I’d be happy just watching her as Sister Jude and James Cromwell as Dr Arden in a room together for an hour… As it is, their confrontation, where they are talking at cross purposes, is electric. Then Sister Jude’s meltdown over her guilt and grief following the hit-and-run incident of 15 years earlier is Emmy-winning stuff.

This show is so off the wall, over-the-top and unpredictable, that it is possible for any character to be written out, die or be mutilated at any moment. The three-way climax, as the trio of escapees flee the cannibal creatures in the woods, Sister Jude meets an alien, and Shelley is cornered by Arden, is great, as any of them could be for the chop.