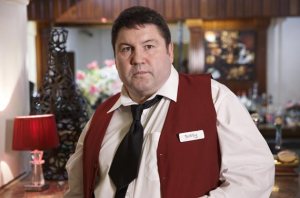 Trying to help others leads to further problems for the housemates…

Captain Hatch returns to the foreground this week, as we discover links between him and others which presents a whole new light on certain aspects of British government policy over the past few years. Both Phil Davis and Damien Molony get the opportunity to show the darker sides of their characters starting to take over – but the trinity of vampire, werewolf and ghost may yet prove to be too strong for Hatch’s plans.

Crumb also gets some attention: the vampire life isn’t everything that he’s expected it to be, and although the character has been, and indeed continues to be the focus of some very black humour, his story has some interesting twists.

But the focus is mainly on Tom, who gets a chance to be a mentor to werewolf Bobby (Ricky Grover – above), who’s been locked away since the 1980s. Although Tom does do a bit of a Larry, building himself up, initially, he realises that this might not be the best way to proceed, and the rapport between the two werewolves is touching.

And as for Alex – well, she is still trying to find the best in everyone. But even she starts to get suspicious of some things that are going on…

Verdict: Mixing humour and nastiness in equal measure, Being Human seems determined to go out at the top of its game. 7/10