Doctor Who: Review: Book: The Doctors Are In 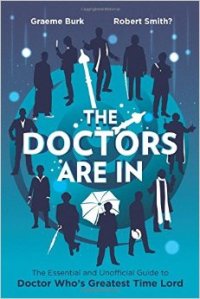 By Graeme Burk and Robert Smith?

In which Messrs. Burk and Smith? embark on a journey through the ages to explore how the Doctor’s character has changed over the past five decades and in what ways it remains the same…

Change has always been central to Doctor Who and essentially the main reason why it’s stayed on the air for as long as it has. As chameleonic as its central character, the show moves with (and occasionally against) the zeitgeist while still retaining its core concept. Companions, Doctor actors and production personnel come and go with regularity, but the Doctor himself remains, even if his personality doesn’t. From shambolic “cosmic hobo” to witty bohemian, psychologically-scarred survivor to old man in a young man’s body, the Doctor stands firm against evil throughout the cosmos.

But has he really? As longtime fans will recall, the Doctor initially encountered by Ian Chesterton and Barbara Wright in Totter’s Lane is a far cry from the mad man with a box that draws in viewers today. Supercilious, paranoid and self-centred, he’s even a far cry from the mischievous grandfather figure that he would mellow into within a year or so. By depicting the Doctor as someone who could be changed – improved – by the people who travel with him, script editor David Whitaker inadvertently stumbled upon one of the tenets that would grant Doctor Who its longevity.

In their examination of each of the Doctor’s incarnations, Burk and Smith? aren’t afraid to express controversial and/or unpopular opinions. For example, Smith? considers Jon Pertwee a “wooden” actor who “settles into playing [the part] on autopilot” unless forced out of his comfort zone. Similarly, he calls David Tennant “a pretty actor, playing to the crowd”. But in both instances (and many others), he backs up his assertions cogently enough that while one might still disagree with these opinions, one respects him for them just the same. And The Doctors Are In is at its most entertaining when the two authors disagree on the same subject, each passionately sticking to their guns like cantankerous Doctor Who fandom equivalents of the late film critics Gene Siskel and Roger Ebert.

In their exploration of the Doctor’s character, Burk and Smith? delve into a handful of each incarnation’s stories which reveal key facets of each Doctor’s personality. While some of the usual suspects inevitably rear their heads (hello, Genesis of the Daleks, The Caves of Androzani, The Dalek Invasion of Earth and Midnight) – a number of overlooked and/or unloved stories – such as The Edge of Destruction, The Romans, The Invasion of Time, Battlefield and The Bells of Saint John – get their turn in the limelight for the aspects of the Doctor that they unearth. Some are given belated due, while others are excused for poor realisation or bad acting.

Burk and Smith? also address the ever-thorny issue of the Doctor and violence. Why, for example, does the Sixth Doctor get stick for killing Shockeye with cyanide when the Second Doctor guides an Ice Warrior fleet into the Sun and the Third Doctor guns down an Ogron? (Perhaps fans find Ol’ Sixie’s Bondian quip in poor taste?) And let’s not forget how in his very first story, the Doctor appeared ready to bash in a wounded caveman’s skull…

The authors’ refusal to veer away from controversy and championing the golden moments that exist in even the worst of stories makes The Doctors Are In more interesting and compelling than other Doctor Who books that toe the line or play it safe. Whether calling Turlough the most memorable companion of the Fifth Doctor or reminding us that the Eighth Doctor called himself a “guy”, they never fail to entertain.

Verdict: Their ultimate summation of the Doctor’s character may verge on tweeness, but the fantastic journey that the authors take us on is entirely worth it. 8/10