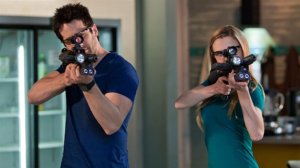 A terror bird gets loose and causes havoc at an ice rink.

With the number of on-going plotlines beginning to cross over, it’s almost impossible now to write a spoiler-free review of New World without descending into generalities, so the reviews for the rest of the first season may contain some spoilers.

This is an Evan, Dylan and Ken Leeds episode – none of the others is seen, although there’s brief mention as to why Toby has suddenly vanished from her position in the Tank. All three characters are pushed forward – the end of the episode clearly marks the start of a new chapter for them – making it an especially heavy episode for Niall Matter and Sara Canning. There are some tough choices for both their characters with Dylan pushed into a course of action that she clearly dislikes, but which, as a predator control expert, she knows is the only right thing to do.

The idea of a Terror Bird at the Thunderbird ice rink must have been irresistible, and it presents us with the wonderful sight of a dinosaur on ice (some frankly hilarious material from Mark Savela and his team). I’m a little surprised that there wasn’t more use of other elements present at the rink (in fact, with very few changes, this script could have been set at any public arena).

Amanda Tapping’s skills as a director continue to sharpen – there’s a very clever tracking shot towards the end of the episode which follows a blood trail, for example – and her experience with the military in the Stargate franchise probably helped with this military-heavy episode. Project Magnet seems to have developed its own black-ops force operating independently of Ken Leeds (almost certainly involving his yeoman), and, as predicted last episode, he has to make some difficult choices, which Geoff Gufstafson puts across without going over the top.

Verdict: Another strong episode that maybe gives a few signposts to the season climax. 8/10