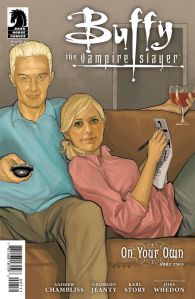 On Your Own: Part Two

In a move that was guaranteed to cause a stir for a number of reasons, Buffy announced in the previous issue that she intended to terminate her unplanned pregnancy. Those readers living in western nations outside the US may not fully comprehend what a brave step such a plot twist is for this series in a country that is conflicted at best on the subject of abortion but Whedon has always been a fierce advocate of feminism and it comes as no surprise that he is willing to tackle such a potentially inflammatory subject as a woman’s right to choose.

In this issue, as her attempts to once again make a semi-normal life for herself seem to crumble around her, Buffy prepares to follow through on the tough choice she made last month. Again we see just how isolated Buffy is and we’re reminded that a slayer is always essentially alone. She does have the ever-attentive Spike, however, and he proves to be her saving grace here. But nothing is perfect and Buffy’s relationship with Spike holds a few question marks of its own.

As has become the hallmark of Season Nine, this issue ends with an unexpected plot twist completely out of left field that will have to wait until next month to be discussed fully. Needless to say I was completely surprised but ultimately feel ambivalent about the direction the aforementioned twist will take the story in. I await next month’s issue with great curiosity though to find out the whys and wherefores. 6/10