Tate doesn’t know he’s a ghost, Violet attempts to join him on the other side, there’s a new medium in town and Piggy Man fearing Derek is the victim of a most unfortunate coincidence… 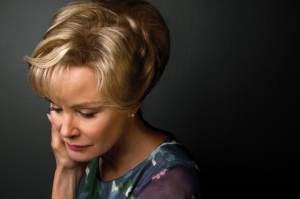 As hinted at in the previous episode, the opening flashback for this one offers the full skinny on Tate’s back story as the perpetrator of a high school massacre, later killed in the ‘murder house’ now occupied by the Harmons by a trigger-happy SWAT team. When Violet is recruited by Constance and psychic Billie (Sarah Paulson) to explain his plight to Tate, she is overwhelmed and driven to a suicide attempt. These are serious issues, but dealt with in American Horror Story’s trademark crazy vision.

The meat of this episode, though, is poor Derek and his fear of urban legends, especially the ‘Piggy Man’. Pity he has chosen Ben as his shrink! Having conquered his fear, he falls foul of a couple of housebreakers who quickly finish him off. Oh, the irony.

There’s yet more meat in Vivien’s new diet of ‘sweetmeats’, as provided by Constance to help the development of the baby. Seemingly influenced by the house, Vivien quickly develops a liking for near-raw pancreas and brains… Her attempt to track down the ultrasound technician from the hospital provides no relief either, as she claims what viewers are beginning to suspect: the child may be the anti-Christ!

Once more, though, it is Jessica Lange who walks off with the acting kudos in a scene in which she’s talking to Addie (through the medium). It’s powerful stuff, and in this material (and in the previous episode) you can see why this stage and screen actress has committed to this television show.

Verdict: Powerful, funny and bizarre, there’s nothing else like American Horror Story on television.