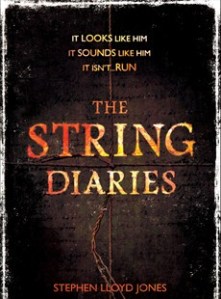 When the person chasing you could look like anyone you know – who can you trust?

The start of this book may feel like you’ve accidentally picked up a Dan Brown novel, with mysterious characters involved in life or death situations that really don’t feel realistic, but stick with it – once you start getting into the multiple flashbacks, it begins to make sense, and you’ll want to see how the various strands play out.

The central conceit is that some of the Eastern European myths and legends are real: Lloyd Jones takes his time before confirming which elements are part of the world he’s creating, and which are red herrings. I suspect he was a fan of Robert Ludlum’s novels: Ludlum had a similar way of embroiling innocents into a situation (something that The Man From UNCLE also did well), so that readers are introduced to what they need to know at a steady pace, rather than with screeds of exposition.

The String Diaries plays out in three timeframes – “now”, a period from 1979 to the end of the twentieth century, and from the mid-nineteenth forwards – with the reader able to deduce overlaps between them. The more you read and learn about Jakab’s past, the higher the stakes for the contemporary section become.

By the end there are various groups each with their own agenda, and perhaps we could have done with one less – there’s at least one character who seems to be in the book just to go through a Raiders of the Lost Ark-type death. However, it’s perfect summer reading for those who like their thrillers with a bit of a fantasy edge.

Verdict: A fast-paced chase thriller with enough of a fantasy element to make it unpredictable. 7/10

Click here to order The String Diaries in paperback from Amazon.co.uk

Click here to order The String Diaries in hardback from Amazon.co.uk