Review: Doctor Who: AudioGo: Destiny of the Daleks 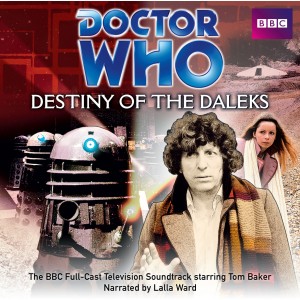 The Randomiser lands the Doctor and a regenerated Romana on Skaro.

The most intriguing thing about this new audio adaptation of Terry Nation’s final script for Doctor Who isn’t Robert Ayres’ excellent script for the narration – as good as his Horror of Fang Rock work – or Lalla Ward’s reading of it, which adds an excitement at times that the televised story rather lacked. It’s the total absence of a certain key character from the cover or the back copy.

This may be a spoiler for some people, but Davros is in this, in his only portrayal by David Gooderson, doing a pretty fair Michael Wisher imitation. There’s the odd phrase that sounds a little off but on the whole this actually stands up a lot better on audio than it does on screen, where the damage to the mask is matched by the ropiness of Davros’ creations.

Destiny isn’t Nation’s strongest script: it has a lot of his regular tropes, and almost seems to try to rewrite Dalek history – since when were they robots? – but you have to wonder how much was Nation, how much was script editor Douglas Adams. There was a cartoon years ago showing a Dalek elevating up the shaft after the Doctor immediately after his taunt with a caption to the effect of “This’ll show him” and in a story that tries to portray them as conquerors (with a quite intense interrogation scene at the start of the second episode, and casual exterminations later), the incongruity of the Doctor’s comments stands out more.

As an audio experience, it passes the time pleasantly, and there’s a good interview with Lalla Ward at the end, with some trenchant views on what the audience should be allowed to know (particularly the children).

Verdict: Nothing is ever going to put this in the Top 10 Dalek stories, but this will help the memory to cheat a little!  6/10

Click here to order Doctor Who: Destiny of the Daleks from Amazon.co.uk