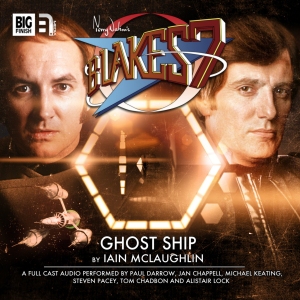 As producer Cavan Scott promised, the Quest for Dayna is a wide enough theme to encompass many different sorts of stories, and for the first time, we get a ghost story set aboard the Liberator. It’s an episode that you would only consider doing if you had an actor of Michael Keating’s calibre, and he carries it off with aplomb, showing the many different sides to Vila’s character that have started to emerge in both the Liberator Chronicles (remember what he did at the end of the trilogy featuring David Warner), and the full-cast audios. As Del Grant notes – and even Avon is forced to admit at one point – Vila isn’t as stupid or cowardly as he makes out, and he has to draw on his inner resources in this tale.

Iain McLaughlin’s script begins with a neat piece of misdirection, suggesting that the story is going to focus on Avon and the rest of the landing party’s problems down on the surface before turning its attention to Vila, Orac and Zen. Alastair Lock puts in a terrific double performance here, getting more opportunity to demonstrate his Zen voice in this script than probably in all the audios combined up to now. Of the rest of the crew, it’s really only Paul Darrow who gets much air time, and he imbues his lines with the necessary ambiguity.

Martin Montague’s sound design is essential to the success of the story, and it’s one of his best pieces of work, not just in the way he treats Nick Asbury and Susan Franklyn’s performances as the Revenants, but in terms of the placing of sound around the listener. It’s definitely one of the stories to listen to on headphones if possible. Full credit to him, director Lisa Bowerman and composer Jamie Robertson for an all-encompassing soundscape.

Verdict: One of my favourite tales from this season, and a great showcase for Michael Keating. 9/10