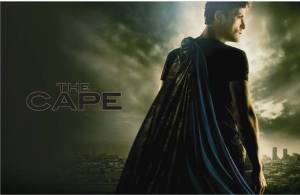 Clean cop Vince Faraday is set up for the murder of Palm City’s police chief. In the guise of comic-book superhero The Cape he fights crime…

There are two simple words that sum up the pilot episode of Syfy’s new superhero show The Cape: unadulterated fun. It’s a fast-moving pilot that’s all killer, no filler, jumping from set-piece to set-piece, although perhaps at the expense of character development. There are two giant explosions in the first 15 minutes alone…

E.R.’s David Lyons stars (without his Australian accent) as the wronged cop who falls in with a criminal circus gang and begins to fight back. Much of the story echoes RoboCop, with the privatisation of a city police force and the hero’s separation from his family.

The show is silly, but unashamed about it. There are shades of the 1960s Adam West Batman (the Carnival of Crime!), only slightly less camp. All that’s missing are the on-screen “Kapows!” There’s also a lot of 1930s-style pulp serial storytelling here, which is an additional pleasure. This is uncomplicated, straightforward comic-book stuff (unlike Heroes), undercutting any schmaltz with a nice line in humour.

Stunt casting (Summer Glau, Vinnie Jones) gets in the way occasionally, although True Blood’s James Frain deliciously chews up the scenery whenever he appears.

Verdict: The Cape is more like the 1990s incarnation of The Flash than The Dark Knight, but it’s promising nonetheless.

The Cape airs on Thursdays at 8 p.m. on Syfy