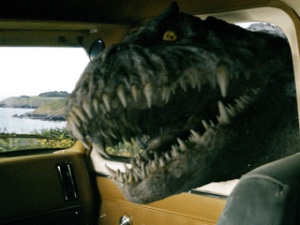 There are multiple plotlines in this week’s episode, with the weakest ironically being the story-of-the-week, which sees Abby, Connor and Matt embroiled in an Irish version of a Hammer horror film, complete with locals who “ain’t seen nothing”, hikers attacked in the dark, and a publican who don’t like strangers. One visual in that looks a bit too much like Clifford the Big Red Dog being transported, which doesn’t help.

The material at the ARC is considerably more interesting. Philip and Lester’s relationship is becoming increasingly rocky, with some more dramatic scenes for Ben Miller than we’ve seen this season. Matt’s search for Emily is obviously tied into one of the bigger arc plots for the year, and Gideon’s brief appearance in the episode starts to bring things together finally.

Some great set design also helps sell this episode, with location filming matched seamlessly with the interiors in the studio, although we could do with a reminder of the sheer scale of the interior of the ARC occasionally, rather than just seeing it in an establishing shot.

Not one of the stronger stand-alone episodes, but one which sees characters apparently moved into position for the second half of the season.  6/10

Check our other Reviews and our ARChive of Primeval interviews