The Kickstarter campaign for Gerry Anderson’s Firestorm launched on September 30, with the view to making a minisode or more to demonstrate the series. But what exactly is Firestorm?

Firestorm was originally conceived and developed by Gerry Anderson in 2001 under the title ‘Storm Force’. The series was eventually bought by a Japanese production company and developed as an anime series. By the time it reached the screen it was quite different to the original series Gerry Anderson had put together.

“We’ve gone back to the original paperwork, updated the story, added to the Firestorm universe’s logic,” Jamie Anderson explained to Sci-Fi Bulletin. “We’ve given it a slight rethink but based on those original notes. I want to make it in Ultramarionation – a modernised puppet technique.”

The backstory for the series has been carefully worked out. By the end of the 22nd century Mankind has pulled itself up by its bootstraps. The wars and political disputes that were so common throughout the 21st century are long behind us, and Man has finally taken responsibility for his own actions. The Earth in 2200 is very different from the one we worried about in 2014 – environmental, social and humanitarian crises are a thing of the past, and things have been that way for nearly 50 years. But in 2202 a new threat emerges.

Terrorist activity surfaces on several continents. At first the world governments deal with them quietly, without any real public awareness but the activity becomes better and better co-ordinated and more widespread. Soon the Continental Senates decide to take action, and they invest vast amounts of resources into forming Storm Force – an organisation designed specifically to investigate and neutralise this new threat.

Supplied with the most advanced technology available Storm Force begin Operation Firestorm to bring down the terrorist group known as Black Orchid. But as the 9th Division of Storm Force (SF9) begin to make progress, they discover that Black Orchid is only a very small part of the picture, and that they themselves have had to make an impossible choice… 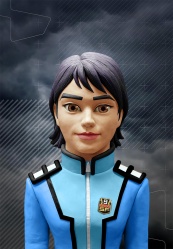 Sam Scott, Nagisa Kisaragi and Drew McAllister are three of the key members of SF9 who have been realised so far; the sculpts shown here are prototypes, and have been sculpted and digitally coloured by world renowned sculptors and puppet-makers Mackinnon and Saunders. Anderson points out that the final puppets will have real hair, which should be taken into account when viewing these sample images. The puppets will be built in standard Thunderbirds proportions, but will be operated with a combination of rods, strings and undercontrol – allowing for elegant (although caricatured) movement.

Ian Mackinnon’s first paid job was working on Gerry Anderson’s pilot Space Police, and many of the team working on Firestorm have strong Anderson connections. Consultant David Elliott directed a quarter of the Thunderbirds episodes, including Terror in New York City and Day of Disaster, as well as multiple episodes of Supercar, Fireball XL5 and Stingray. Director Mark Woollard worked with Anderson from the early 1980s on include Terrahawks, Dick Spanner, Space Police, Space Precinct, and New Captain Scarlet, and beyond, working with Gerry to develop his new ideas until Alzheimer’s Disease stopped him working in 2011.

Steve Kyte, in charge of character design, was chosen by Gerry Anderson to work on the project back in 2001, and is well known for his many Supermarionation connected strips and covers. Set designer Andy Rolfe worked with Gerry on several projects, and was responsible for the set recreations seen in the new documentary Filmed in Supermarionation. Steve Begg, the Effects Supervisor, worked on everything from everything from Terrahawks to Space Precinct and New Captain Scarlet. Eric Chu, in charge of Concept and Design, redesigned the spacecraft and the Cylons for the revamp of Battlestar Galactica, and has been working with the Anderson team on poster designs, digital paintings and concept work.

Although this is their first Anderson credit, both Mike Tucker, in charge of Model Effects, and Michael Okuda, the Visual Consultant, have very strong genre track records. Tucker is a BAFTA award winner and Emmy nominated model effects artist who has worked on both the classic and new series of Doctor Who, as well as Red Dwarf – his Model Unit were responsible for the award-winning effects on The Day of the Doctor last year. Okuda worked on the Star Trek shows from The Next Generation to Enterprise, creating the LCARS look for the computers, and oversaw the remastering of the original series into high definition after Star Trek went off air. 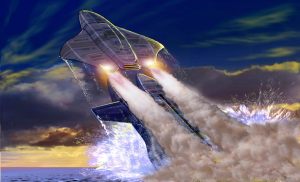 It’s all being overseen by Jamie Anderson, Gerry’s younger son, who has been working extensively on carrying on his father’s legacy. Gemini Force One, a novel series based on concepts Gerry was working on in his last years, began as a Kickstarter last year and was quickly picked up by Orion Publishing with the first book by M.G. Harris due out next year. He’s also directing and producing further adventures of the Terrahawks with Big Finish.

For more information and to back the Kickstarter go to http://www.gerryanderson.co.uk/firestorm